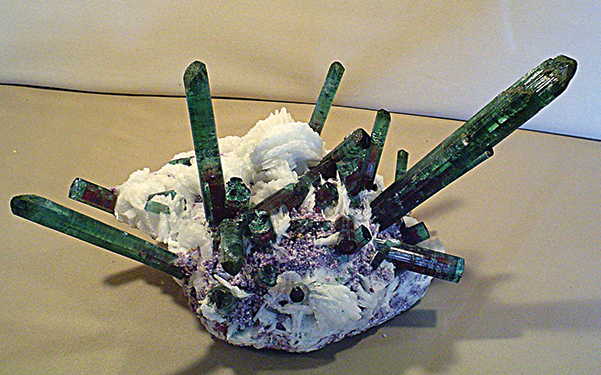 Exploring how pegmatites are formed is important because they are often the most beautiful and eye-catching mineral specimens. The pegmatite minerals we admire are the rare remains of huge granite masses that originated at least 30 kilometers deep in the earth’s crust.

Not every granite pegmatite holds gem pockets. Those that do yield rare and beautiful crystal groups that are found on every continent. Pegmatites include tourmalines, topaz, garnets and gemmy beryl varieties like delicate pink morganite and crystals of sparkling chrysoberyl. With them are matrix pieces like perfectly crystallized quartz, feldspar and mica.

We see so many of these wonderful pegmatite minerals that we may think gem pegmatites are fairly common. Far from it. For centuries we have made it a practice of finding and mining them.

How Crystals in Gem Pockets are Formed

Crystals form only when the last chemical vestiges of a molten granite mass under great pressure cools.

The granites in the earth’s crust vary according to their chemistry. The most common types are fine-grained. They are composed mainly of quartz, feldspar, mica and other minor minerals. The crystals are small and shapeless. This type of granite yields no gem crystals but is quarried for building stone, countertops and even tombs.

How slowly a granite mass cools affects grain size and the possibility of gem pockets. The more slowly it cools grain size gets larger and may show some crystal forms.

The watery fluids of the granite also come into play. The fluids tend to become richer in rare mineral matter as the common mineral crystals like quartz and feldspar leave the fluid and crystallize. This makes the fluid more viscous. The remaining fluid becomes almost gel-like. The dissolved gases develop bubbles which can account for the pockets observed when opening a pegmatite.

The gel-like fluids of an intruding granite mass are mostly made of silica. Quartz and feldspar form first as they crystallize at high temperatures.

Those same fluids also carry a lot of elements in trace amounts that stay fluid later and only crystallize at lower temperatures. These trace elements are critical in determining the final gem crystals. These minor (but so important) elements in the final solution include uranium, lithium, sodium, calcium, cesium, beryllium, rubidium, boron, niobium, tantalum, and even traces of metals like chromium, iron and manganese.

These uncommon elements are vital to forming the gem crystals we seek in pegmatite pockets. One reason they persist is that they do not easily become part of the silicon minerals quartz and feldspar. They readily form their own species, like tourmaline, in the later forming gem crystal pockets.

How Pegmatites are Formed Under Pressure

The constant fluid pressure causes a rising granite to move horizontally between weaker rock layers. Such narrowing space and movement cause the hot mass to slowly cool and the crystallization of quartz and feldspar begins.

With cooling comes a slow drop in pressure. The dissolved gases can expand and exert pressure on the hot surrounding rock. This creates pockets where crystals can later develop.

The pockets are not empty chambers. The gases and fluids accumulate giving the minerals in the solution an opportunity to accumulate and crystallize sequentially. Some elements - like lithium and fluorine - remain in solution much longer than other elements like silicon.

This means the final vestiges of the fluids from the once-huge granite mass end up with areas of concentration for these rare elements to form gem crystals like beryl, tourmaline and topaz.

The trace metal elements are not concentrated enough to form their own crystals. So they end up as trace elements in crystals that are forming. Elements such as manganese, iron, vanadium and chromium end up as chromophores in the forming gem crystals giving them the beautiful colors we enjoy.

Watermelon elbaite is pink in the center thanks to manganese as its forming and green on the perimeter thanks to traces of iron atoms during final crystallization. 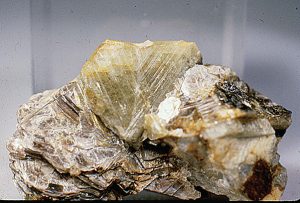 Over the years there has been some disagreement over what has been referred to as pocket explosion. When some gem pockets are opened they contain lovely gem crystals. But instead of being attached to the pocket walls, they are broken and scattered throughout the pocket filling.

After the crystals develop, it’s obvious that something happens to break some crystals from their bases and even scatter fragmented crystals.

A practical example of this is the elbaite crystals being recovered from the Pederniera mine in Brazil. The tourmaline crystals from here can be as much as a foot long or more, very slender and often in diverging sprays of jaunty angles. They are fragile and fragmented when the pockets are opened.

When you see these amazing tourmaline crystal sprays on display, you have to wonder how such long and quite delicate prisms could have survived intact. They did not!

When a gem pocket is opened, miners carefully remove every section of the elbaite crystals with every scrap, including the crystal base still attached to the pocket wall. Then the fun begins. Each piece from a pocket is carefully cleaned and laid out on a table. Like a huge jigsaw puzzle, the crystals are put back together piece by piece.

It helps that today’s cements are powerful and nearly invisible so you can’t see the repairs. Such work on crystals today is common knowledge and reputable dealers discuss this practice freely. What had been torn apart, perhaps by a pocket explosion, is returned to its matrix as a whole crystal where it formed.

This brings up the question of how these giant crystals are broken, not violently but fractured from their base and broken into sections so nicely that they can be put back together. Ground movement may be a contributing factor.

When the final stages of a granite pegmatite finally settle down and create pockets of crystals, the solution is still hot, around 700 degrees or hotter. Trapped in a pegmatite flow within the crust, water still under pressure can’t convert to steam and remains fluid.

Imagine what the water in a gem pocket will do if a sudden drop in pressure happens as the pocket develops a fault. Water converts to explosive steam and more fragile crystals will fracture, yet survive undamaged in pocket clay and can be reassembled.

Do all gem pockets explode? No, but when they do we now have the means to retrieve Mother Nature’s creations. When you next see gorgeous pegmatite gems remember the hazardous journey they made just to please you.

This story about exploring how pegmatites are formed previously appeared in Rock & Gem magazine. Click here to subscribe! Story by Bob Jones.

Where to Find Fossil Fish

How to Melt Silver to Make Jewelry