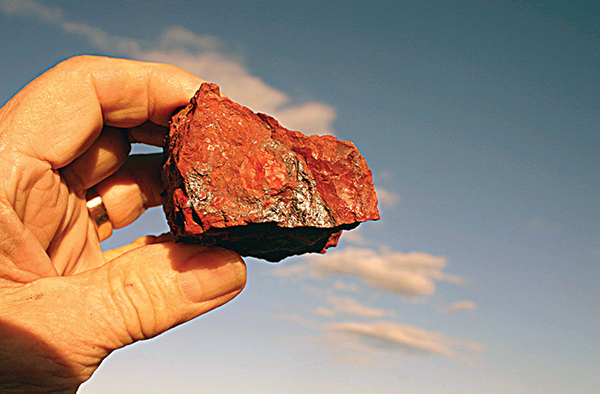 What are iron minerals? Iron plays a large role in our earth’s history. Understanding iron and magnets helps us unlock a deeper understanding of the earth.

Iron minerals played a major role in our history. After the Bronze Age came the Iron Age. Iron also plays an important role in our health. We are red-blooded thanks to the atoms of iron in every red blood cell. It grabs oxygen, carries it where needed, and releases it. Without it, we would be anemic and die.

Some iron minerals like magnetite, or lodestone, are attracted to a magnet. Others are not. Iron minerals like siderite and hematite are not affected by a magnet because the iron in them is combined in a mineral compound different from magnetite.

We know that for a magnet to work things must line up internally. The “things” are electrons, which have to spin in the same direction creating a north-south influence. This is why nails, or needles, become magnetized from electricity, which flows in one direction. 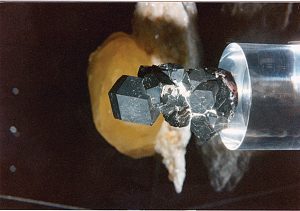 Stroking the needle in one direction with a magnet will magnetize it. But once formed, are magnets permanent? Over time a magnet’s strength may slowly weaken. Hitting, or dropping it, will disrupt the electron spin and disrupt the alignment of electrons and magnetism.

All elements are composed of protons and electrons. Forming a mineral requires an element acting as a metal, called a cation, which gives up its electrons to form a mineral. Iron does this and is positively charged as a result.

Iron and oxygen can join in a variety of ways to form compounds, so we get different iron minerals, magnetic magnetite and non-magnetic hematite, siderite ad infinitum and even rust.

What are Iron Minerals? - Magnetite

Most mineral collectors are familiar with minerals centered on iron-like magnetite, a natural magnet. Magnetite tends to be black in color, lustrous and is found in many locations. Its crystals are cubic in the isometric system, but cubes are not common.
It more often develops in octahedrons and less often in 12-sided dodecahedrons.

Magnetite usually occurs as small octahedrons, or tiny grains, in a variety of rock types. When crystallized, it is often found as simple octahedrons to an inch on an edge.

Fine examples of octahedral magnetite have regularly been dug by rockhounds on Twin Peaks, Millard County, Utah. The octahedrons are usually under an inch in sharp clusters.

One major use of magnetite in early history was in the Age of Navigation to indicate north and south. A type of magnetite, called lodestone, was used in navigation and is named “lode,” which means “journey.”

What are Iron Minerals? - Lodestone

A compass works because the earth itself is surrounded by a life-saving magnetic field. What’s very interesting, and maybe scary, is we know the earth’s magnetic field reverses. We just don’t know why or know the consequences.

Be that as it may, it’s a good thing the earth has a magnetic field because it protects us from most of the lethal radiation constantly discharging from the sun. Some of that radiation, like ultra-violet rays, does penetrate. But the earth’s magnetic field makes life as we know it possible.

Since we depend on the earth’s magnetic field, we need to know what produces this life shield. To understand, we have to look at the earth’s core. We can’t peer that far into the earth, so we must use other means. Earthquakes are one way to “look” into the earth.

An earthquake causes the entire earth to vibrate. The rock structures of the earth can slow, speed up, or deflect those vibrations which tell us something about the rock layers within the earth.

From this, we are convinced the earth’s innermost core is a solid nickel-iron suspended in an outer semi-liquid nickel-iron-rock core. As the earth rotates, the inner core rotates slower creating that all-important magnetic field.

If we are right about the earth’s core where did the iron come from? The general theory is that the earth was formed by accretion, the repeated crashing together of individual rocky masses, comets, and meteors as gravity pulled them in. That material was leftover from ancient exploding stars.

Note that iron, atomic number 26, is the heaviest element that a star like ours can create by atomic fusion. Gravity pulled all this space debris together to form the earth 4.6 billion years ago and we are still growing.

During the earth’s early millennium, the crust was rich in meteorite iron while the earth’s early atmosphere was methane, ammonia, and carbon dioxide. Then an organic life form called stromatolites developed photosynthesis, which takes in carbon dioxide and produces oxygen changing the atmosphere. Oxygen, combined with the available iron in the crust, form massive amounts of iron compounds like rust, hematite, siderite, magnetite and other iron minerals.

We now find these huge iron oxide deposits and mine them in Australia, Alabama, Minnesota and elsewhere. The huge Mesabi iron range, among others, are what made America a huge steel producer.

We have to be grateful to magnets and the earth with its magnetic field. Its slowly rotating nickel-iron core has made life possible on earth and protected it so we can enjoy the benefits of our red blood cells as we collect iron minerals magnetite, hematite and siderite all the while dealing with annoying hydrous iron oxide: Rust!

This story about iron, the Earth's Protector, appeared in the August 2021 issue of Rock & Gem magazine. Click here to subscribe! Story by Bob Jones.