In days of old, paleontologists had just bones and imagination to tell the story of life gone by. My, how times have changed! Increasingly, paleontology labs are looking a lot like biology labs equipped to perform sophisticated genetic analyses.

Per a recent issue of the journal Nature, one of those labs has been kept busy analyzing what is reported to be the oldest animal DNA discovered to date. The samples came from mammoth molars dug up from Siberian permafrost decades ago. They have been dated as far back as 1.2 million years!

DNA analyses allow for more sophisticated comparisons than can be told simply from the bones of critters that, superficially, may have looked an awful lot alike. They also allow for comparison with modern-day critters that may have descended from the fossils in question.

In this instance, researchers say that two of the mammoths recently examined via DNA analysis may represent two entirely different lineages. One may have given rise to woolly mammoths, but the other seems to represent a previously unknown line that, perhaps, eventually led to Columbian mammoths.

While represented by just tiny snippets invisible to the naked eye, DNA samples are telling a longer, fuller version of the big story of elephant evolution. 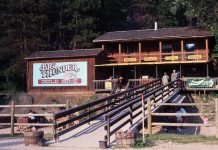 Exploring the Big Thunder Gold Mine

How Might the Discovery of More Liquid on Mars Impact Geology?