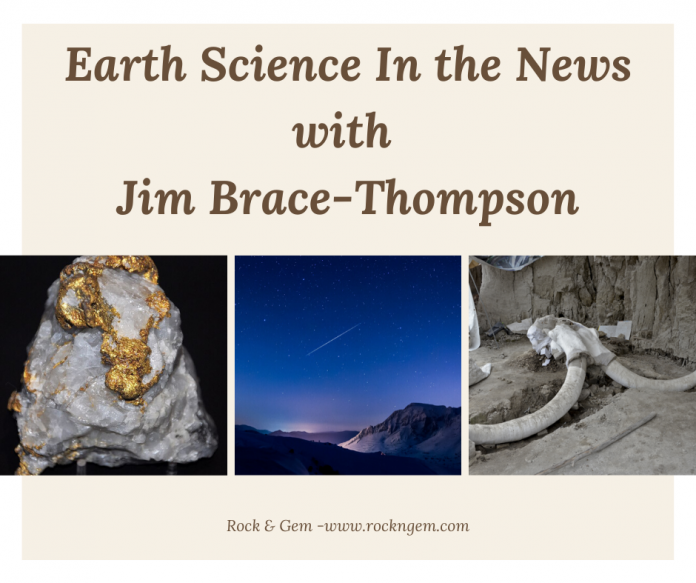 Fossil mammoth skeletons have long been found with spear points alongside and/or embedded within them and with clear signs of slicing and dicing with knapped knives to remove meat from the bone.

In fact, huts constructed of mammoth tusks and bones have been found in parts of Ukraine and Russia. And so, humans in Eurasia and North America have long been known to have hunted and butchered mammoths during the Ice Ages. But a recently reported fossil site in Tultepec, Mexico, provides dramatic evidence of one specific way just such hunts were conducted.

The site, located about 25 miles north of Mexico City, has been dated at 15,000 years old, per an announcement made on November 6 by Mexico’s National Institute of Anthropology and History. There, the remains of at least 14 mammoths were found within two clay pits with vertical walls that were evidently dug by human hunters. The pits measure some 6 feet deep and nearly 25 yards in diameter.

Luis Córdova Barradas, the chief investigator of the research team, believes several dozen hunters may have frightened and corralled herds of mammoths, diverting some to their death in the clay pits. In all, over 800 bones—including 8 skulls, 100 vertebrae, and 179 ribs—have been logged from these two pits. It is the first and so far the only discovery of pits intentionally dug to trap mammoths for human consumption.

The nation of South Africa has become synonymous with such Earth riches and resources as diamonds and gold ore. But a recent 60 Minutes episode on television reported that some South African gold mines are finally running dry. Mines shafts are producing ever-shrinking yields even as they run ever deeper. How deep? In some instances, as low as two miles below ground!

What may be shaping up to be a bust for gold miners is turning into a boon for life scientists. In these mine shafts deep within the Earth’s crust, they are discovering a host of “extreme life” forms. These vary from simple cells to complex worms, arthropods, and more.

Life, it seems, is finding a secure foothold even in deep and inhospitable realms of our planet Earth. This suggests that it may be possible for life to thrive somewhere deep within the crusts of otherwise apparently inhospitable planets, such as Mars. Even if a planet appears barren on the surface, who knows what sorts of communities may be thriving deep down and far below?!

Watch for them! Within the coming few weeks we will have no less than three meteor showers streaking across Earth’s upper atmosphere.

Most meteor showers—including the Ursids—are caused by tiny debris specks left by the tails of comets that passed through our solar system long, long ago. In contrast, the Geminids and Quadrantids are believed to originate from particles left by the passing of “rock comets” more closely related to asteroids. Every year, right on schedule, our Earth passes through such debris fields in its swing around our Sun. As we swing around, little particles from comets or asteroids (particles often no larger than grains for sand) burn up in our atmosphere, resulting in dozens and dozens of streaks per hour in our night sky.

For those further interested in the place of our Earth within the solar system, the Winter

Solstice for the Northern Hemisphere occurs at 11:19 pm Eastern Standard Time the night of December 21. The solstice marks the moment the angle of the sun relative to the Northern Hemisphere is at its lowest point, thus making for the longest night of the year. This is sometimes called “Yule” or “Midwinter.” The Earth’s axis then reverses to begin a gradual six-month tilt toward the moment of the Summer Solstice, or Midsummer, which marks the longest period of daylight and the shortest night of the year.

As for me and my wife Nancy, we are headed to Scotland to spend the holidays with our first grandchild Lukáš in far northern latitudes. Regrettably, we arrive directly upon the Yule, when that longest night of the year will be marked by as much as 16 hours of darkness in Edinburgh. At least we can lighten our luggage by leaving our southern California sunglasses at home!

Footprints in the Sands of Time Are Disappearing