Spessartine is a mineral that often garners a double take for its crystal habit and its incredible color.

Sometimes described as a reddish-orange or even blood red, based on its formation of solid solution series with almandine, the commonly deep richness of the color of this member of the garnet family is on par with its unique story.

The type locality of this mineral, and the area for which it was named, is the Spessart Mountains of Bavaria, Germany. The mountain range crosses the German states of Hesse and Bavaria and is marked by dense forest hills and valleys where ancient beech and oak grow in volume. In addition, the area is known for the presence of red sandstone (known in Germany as buntsandstein), which is said to have formed 250 million years ago. 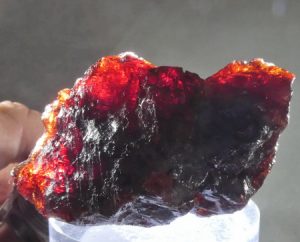 According to Minerals.net, this manganese aluminum silicate garnet was considered a rare find for quite some time until an exciting discovery in 2008. Far from its type locality of Bavaria, Germany, a deposit near the Serengeti National Park in Tanzania served as the place of discovery for brilliant orange examples of Spessartine crystals.

Before the discovery in 2008, the last significant discovery of spessartine took place in the late 20th century in Tongbei and Yunling, Zhangzhou Prefecture, China. These examples were best known to appear as "gemmy crystals coasting Smoky Quartz," as reported on Minerals.net.

Other notable localities for spessartine specimens include deposits in historic Minas Gerais, Brazil, which is the locality for the specimen featured in this Mineral of the Week; New South Wales, Australia; and Iveland, Aust-Agder, Norway, among others.

Spessartine has also been discovered, albeit more sparingly, in the United States, in deposits including the Little Three Mine and the Pack Rat Mine, both in San Diego Co., California; Ruby Mountain, Chaffee Co., Colorado; and the Thomas Range in Juab Co., Utah, to name a few.

Perhaps one of the lessons we can take from spessartine is not to consider a mineral to be completely uncommon but, instead, just not yet fully discovered.

The specimen of spessartine featured in this Mineral of the Week was extracted from the Navegadora claim, Conselheiro Pena, Minas Gerais, Brazil. The specimen, which measures 5.1 x 3 x 2.9 cm, is described as having great luster, translucency, and many geometric crystal faces. The specimen is offered by Isaias Casanova through Mineral-Auctions.com.