Lurking about beneath the sand, mud, and ooze of today’s seafloors, so-called “Bobbit worms” wait patiently for a fish or other marine animal to amble by, then make an ambush lunge. With fiercesomely barbed jaws, they pull struggling prey down into their burrows for a feast. “It’s just a worm,” you say? Well, consider a worm that can grow nearly 10 feet long and whose mandibles can cut prey in half!

It now appears critters exhibiting this behavior extend back at least 23 million years. Per an article in the online open-access journal Scientific Reports, a team of paleontologists including Yu-Yen Pan and Ludvig Lowemark (both of National Taiwan Univeristy), Masakazu Nara (Kochi University, Japan), and others describe not fossils of the worms themselves but rather “trace fossils” in the form of burrows left in sediments. Some of these burrows are over 6 feet long with a distinctive “L” shape capped by a feathery funnel-like structure. They have given these petrified burrows the scientific names of Pennichnus formosae.

Over 300 examples of these trace fossils were discovered in fine-grained Miocene sandstone rocks of northeast Taiwan. Paleontologists developed 3D models via layer-by-layer serial grinding of sediments and CT (computed tomography) scans, and they used X-ray fluorescence to analyze chemical compounds left behind to show the similarity to mucus-lined burrows of today’s Bobbit worms. Thus, paleontologists were able to bring back to life a creature that left no direct remains of itself but left a trace that tells a deadly tale from a cold case crime scene over 20 million years old! 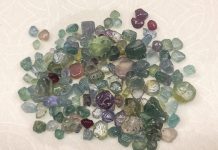 Spending Time At Kingman Mine