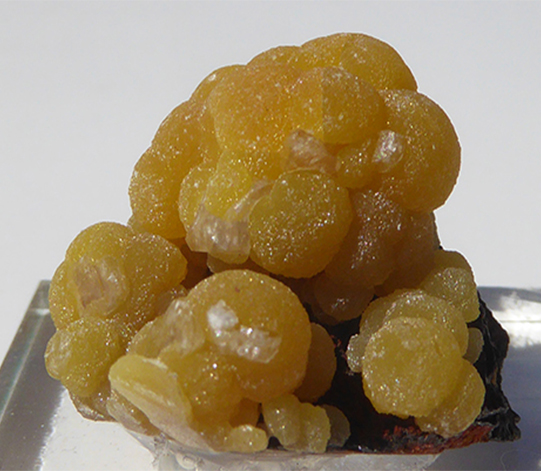 Mimetite is a lead arsenate chloride mineral with the chemical formula of Pb5(AsO4)3Cl. In structure and appearance, it can closely resemble pyromorphite, Pb5(PO4)3Cl, and it is also structurally similar to vanadinite, Pb5(VO4)3Cl, both of which form a related series with mimetite.

While pyromorphite is often greener in color and vanadinite redder in color, the three minerals often overlap in their chemical make-up and can be confused with one another. In fact, it can sometimes take laboratory analysis to distinguish mimetite from pyromorphite. Thus the origin of the name, mimetite: mim't's is a Greek word meaning “imitator”. It can form as somewhat rounded hexagonal crystals with resinous luster or as globular crusts in colors ranging light to dark yellow, greenish-yellow, orange, brown or reddish-brown.

Mimetite is a relatively soft (Mohs 3.5-4) secondary mineral that forms in weathered, oxidized zones of lead ore deposits, much like its sister minerals, pyromorphite and vanadinite, but it is far less common than these other two. Although it contains lead, it is only considered a minor ore of lead due to its rarity and more often serves as a mineral for collectors rather than as ore for the hopper.

In addition to pyromorphite and vanadinite, mimetite also is found alongside such minerals as calcite, galena, smithsonite, and wulfenite.

Famed German scientist, writer, and statesman Johann Wolfgang von Goethe (1749-1832) described large tabular crystals from a mine at Johanngeorgenstadt, Saxony, Germany, which today is considered the “type locality” for this mineral. A couple of old mines in at Cornwall and Cumbia in England also are considered classic localities. More recently, large gemmy crystals have been found at Tsumeb, Namibia, the Northern Territory of Australia, and the Guangdong Province of China.

A Sea without Sharks?