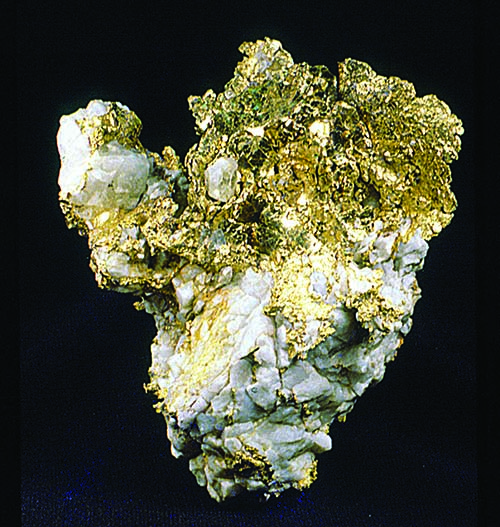 We have cherished gold since the first human picked up a yellow nugget. We have given it value, gone to the ends of the earth searching for it, and dug the deepest mines to collect it. People have acquired it just to own and admire it for its value, color, crystal form, and aesthetic beauty. You may think by now we would have dug all of this precious metal. Not so!

An amazing find on Father's Day, 2018 in Western Australia added pounds and pounds of gold to the Earth's still-growing horde. This is the first in a series of three articles wherein I will explore two great museum gold collections in the Harvard Mineralogical and Geological Museum and the Denver Museum of Nature and Science. Also, we will also examine what Australian miners term a 'miracle gold find,' a true horde of gold in quartz. 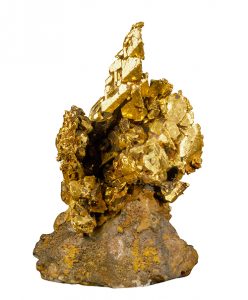 Every major museum boasts a collection of crystallized gold. Among the more spectacular and better-known museum gold collections in America are not in California, but in Denver, Colorado and Cambridge, Massachusetts. In both instances, I was lucky enough to handle and photograph the best of these collections.

The Harvard's Burrage Gold Collection is the focus of this article, and in Part Two (appearing in the February 2020 issue of Rock & Gem) I will describe the amazing Australian discovery of millions in gold in quartz, In Part Three, scheduled to be published in the March 2020 issue of Rock & Gem, we will return to museum collections to examine the marvelous crystallized gold collection, featured in the Denver Museum. If all goes well, the public will be able to see some of the Father's Day gold from Australia once again, at the Tucson Gem and Mineral Show.

The stunningly beautiful crystallized gold collection at Harvard has a delightful history. The Harvard staff is to be congratulated as they have often shared the best of the collection with the mineral collecting public at major shows like Tucson. I am personally indebted to Dr. Carl Francis, now retired Harvard curator, who gave me permission to examine and take photos of many of the Burrage gold specimens in his office.

To get the collection where I could photograph it we had to bring it out of a bank vault. With two flight bags, we hiked across Cambridge Commons to the bank. We filled the flight bags with millions in gold and hiked back to Carl's office. I doubt few collectors have walked the streets of Cambridge, Massachusetts, carrying flight bags holding millions in crystallized gold.

The core of the Harvard gold collection was assembled by lawyer industrialist A.C.Burrage, Harvard class of 1883. He had a large mineral collection, including the Georges de la Bouglise gold collection, bought in 1911. That collection has an impressive worldwide array of gold, and also boasts a rich collection of Bisbee azurite and malachite. 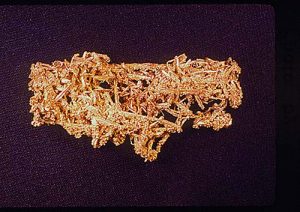 fortune, some of which he used to collect superb crystallized gold. The bulk of his collection is from California but, thanks to Bouglise other countries like Australia, France, Russia are represented.

Some of the Harvard gold is so unique they have been given names like "Papillon," "Butterfly," "Antlers," and "the Fan." Most impressive is the world's largest ram's horn of wire gold, properly named "Ram's Horn". This beauty has been featured in countless books and articles and displayed at shows as the world's finest example of a gold ram's horn.

The Ram's Horn is an amazing example of crystal growth that extended primarily in one direction. It looks like a bundle of thick yellow wires that start from a gold base, and then the wires grew to create a one inch thick, tapering four and a half-inch long curving horn, with a cute little curl termination. Weighing 263 grams and measuring four-inches plus in length, it is the largest known ram's horn gold and is considered priceless.

For years those who have admired and handled the Ram's Horn, including this writer, all have wondered if the piece is pure gold or, like all naturally occurring gold, have a measurable amount of another metal in it like silver. Gold can naturally alloy with other metals including copper, but is most often alloyed with silver. For years to determine the gold-silver content of a specimen, it required damaging the piece to obtain a bit of gold for testing. A less accurate test is to streak the gold on a black rock slab to see its yellowness.

So, testing the Ram's Horn was not done until recently when it was taken to Los Alamos National Laboratory, where it could be bombarded with radiation without damaging the piece. The results were very interesting as the tests showed the Horn is up to 30 percent silver. That is not surprising as the silver content of Colorado gold, the source of the Ram's Horn, tends to run high in silver.

Most of the gold in the Burrage-Harvard gold collection is from California, which often has a silver content of around 90 percent.

The Ram's Horn actually formed in a gold-copper mine in a Colorado. The piece was 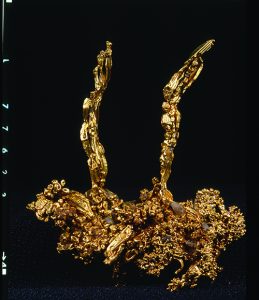 found in the now-closed Ground Hog mine, Battle Mountain, Eagle County, Colorado. You may see the mine also listed as within the Red Cliff or Gilman districts. The Horn was described in a Colorado newspaper in 1893 and since that time has become well known around the world. It did not become part of the Harvard collection until 1947 when it was donated. In the 1990s, I enjoyed photographing it in Carl's Harvard office.

Having a silver content of up to 30 percent is high but not exceptional for a gold specimen. I doubt we have ever found natural gold that is 100 percent gold. California and Colorado gold tend to include anywhere from 10 to 15 of silver content. Of course, every deposit can vary, so silver content in gold for a general area is only an average. Australia boasts some gold that runs very low in silver content. The gold percent of specimens from 'Down Under' has been as little as three or four percent silver content. Gold from Romania probably has the highest silver content. Some of it has so much silver it is actually called electrum and has a very pale yellow to a silvery color. There is no exact gold-silver percent to label a specimen as electrum, but some descriptions suggest a silver content of 45 percent or more qualifies as electrum. The ancients used to streak a gold specimen to visually see its color to determine gold and electrum. Streaking is a fairly good indicator to determine value, while also revealing fakery. The Harvard Ram's Horn is a fine yellow color and is truly a gold specimen.

My favorite gold in the Harvard collection is not the Ram's Horn, but a small cluster of well-crystallized gold, the Antlers. By itself, it would just be a nice specimen. But, rising up from a solid base of crystallized gold are two nearly parallel slightly curved rods of gold crystals. They stand a couple of inches high, are brilliantly lustrous, and show bright crystal faces along each rod. How these "Antlers" developed as they did is a wonderfully curious event.

Another intriguing specimen looks like someone has taken a hammer to it and flattened what should be a nice straight line of three-dimensional octahedrons with triangular faces. Instead, these crystals are strung together as a flat, straight row of diamond-shaped crystals. The color is fine, as is the luster. Properly mounted it would make a lovely and very colorful pin. Another crystal is a one-inch cube that shows what I call "oscillatory growth." As the crystal developed, it could not decide if it wanted to be a cube or dodecahedron, so it grew with alternating crystal faces switching from cube to dodecahedron, to form an intriguing stepped growth crystal with rounded edges. This crystal form is most interesting.

Another very attractive specimen is one I call "The Fan". It is a relatively flat array of interlocking filigree gold crystals that have formed a hand-sized array of bright gold crystals. It is only one crystal width thick, but over five inches wide with a flat fan-like terminating form. Originally "The Fan" was said to be from Alaska but is actually from the Alaska mine, located in California.

The "Papillon" or "Butterfly" was from the de la Bouglise collection, hence its French

name. You don't need much imagination to see a butterfly when looking at this really attractive gold specimen. The specimen is from Tuolumne County, California and measures about 12.5 cm across. It consists of a solid quartz core or centerpiece, representing the insect body. Spreading out left and right from the quartz are bright flattened and slightly curved gold octahedrons that suggest the wings of the butterfly. Small crystalline gold forms where the head of the insect would be. All in all, it is a very attractive piece and a fine example of crystallized California gold.

The collection also has gold from foreign countries and other U.S. sources. One of the more famous sources of gold in Colorado is Farncomb Hill, Breckenridge, Colorado. If fact, in part three of this series of articles, I will describe the Denver Museum's gold collection, which is largely crystallized Farncomb Hill, Breckenridge gold. I spent a couple of summers with my family in Breckenridge but had little luck hunting gold, but we did enjoy horseback riding at 10,000 feet. 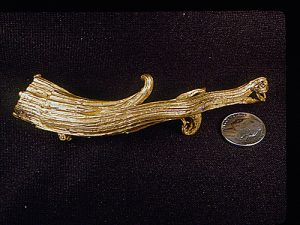 One mine on Farncomb Hill, the Wire Parch, is famous for its wire gold. Prospectors found masses of crystallized wire gold weighing many, many ounces. The Harvard collection has a lovely six-inch inter-grown cluster of gold wires, all reticulated twins intersecting to form a network of fine delicate crystals. The specimen is more or less flat, about four by two inches without matrix. It is an excellent example of Farncomb Hill gold.

The Harvard collection has several fine gold specimens from other countries worthy of mention. It boasts the largest gold nugget ever found in France, a smooth water-worn mass weighing 509 grams! French Guiana is represented with quartz and crystallized gold weighing 296 grams. The famous Australian gold source of Ballarat is represented by a nicely crystallized gold in Harvard collection. Clearly, a visit to the Harvard Museum should be on your bucket list. The gold specimens are only part of this superb public facility.