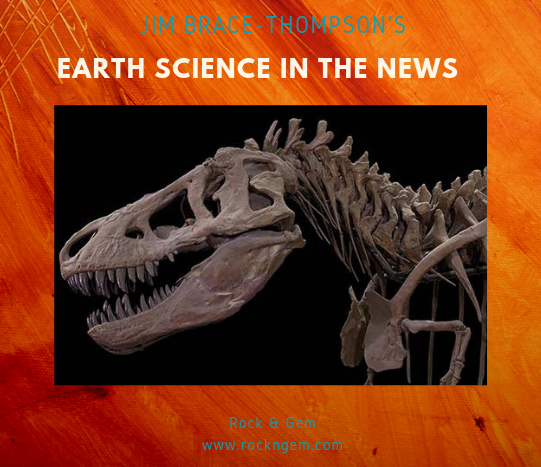 The Tyrant King Comes to Life in New York City

Tyrannosaurus rex—the “tyrant king”—and it’s an ever-enlarging family of dinosaurian ancestors and relatives have been in the news a lot the past few years. A new temporary exhibit currently running at the American Museum of Natural History in New York City is likely to add to the hullabaloo. Entitled “T. rex: The Ultimate Predator,” this special exhibit runs through August 9, 2020.

Per the May 17 issue of the journal Science, curator Mark Norell and colleagues have pulled together “the most elaborate celebration of tyrannosaur biology ever assembled.” And they have done so in fine fashion.

Lifelike full-scale models adorn the halls, visitors can don virtual reality goggles and “feed” a T. rex and engage in other hands-on activities, and the focus broadens out to show how the tyrannosaurid family started and changed throughout its evolutionary history. You’ll see baby T. rexes that look like fuzzy down-covered ducklings. You’ll see small, skinny, fleet-footed ancestral versions. And, of course, you’ll meet the real deal in the form of actual bones, claws and teeth, casts, and life-sized models. It’s said that everyone attending will leave this exhibit with a whole new view and appreciation of the Tyrant King.

Major Earthquakes Strike around the Globe in May

The month of May saw seismometers sway wildly worldwide. On May 12 (Mother’s Day), Panama was rocked by a magnitude 6.1 earthquake that was initially reported as being centered near Plaza de Caisán not far from the northern border with Costa Rica. The actual epicenter, at a depth of 23 miles, was reported by the USGS to be near Paso Canoas, Costa Rica, directly on the border with Panama. The quake came and went quickly. Homes were rattled, some collapsed, walls of a hospital and other buildings cracked, and products fell from shelves in grocery stores and shops.

Just two days later, a much larger magnitude 7.5 quake struck Papua New Guinea near the remote town of Kokopo, triggering a tsunami warning. Fortunately, no big waves washed ashore. Then on May 26, an even bigger magnitude 8.0 earthquake hit a remote Amazonian jungle region in Peru. Even though it was centered within a large nature preserve, it still collapsed some buildings and caused power outages and resulted in at least one death.

It’s been reported that the largest earthquake ever recorded by modern instrumentation measured in at a whopping magnitude 9.5 in southern Chile, killing 1,655 in 1960. Fortunately, the three May earthquakes had one common denominator: all were centered in regions of fairly sparse populations, thus minimizing damage and human casualties that are commonly seen during such large quakes.

Drilling Deep Below to Explore Rising Seas Above

We know, in very broad strokes, that throughout Earth history there have

been dramatic swings in climate. The Eocene was a “Hot House” epoch while the Pleistocene saw a plunge into “Ice Ages.” The rise and fall of sea level are influenced by such climatic swings, as well as by such geological factors as colliding continents and mountain-building episodes.

One way to explore and analyze such change in fine detail is to drill. For this, a big tool in the arsenal of the geological community is the research vessel the JOIDES Resolution (JR). Funded by the National Science Foundation and operated by the International Ocean Discovery Program, JR travels to key stretches of the ocean around the world to drill deep and bring up core samples of the seafloor.

The remote Amundsen Sea is home to the West Antarctic Ice Sheet, which is especially sensitive to climate change and has been showing rapid ice loss. Thanks to a JR mission during the Antarctic summer months of January through March, for the first time we have significant samples of deep-sea sediments from this spot.

Learn more about the Antarctic Circumpolar Current, courtesy of the JOIDES Resolution team:

Hundreds of meters of core samples will allow geoscientists to peer into as much as 6 to 23 million years of Earth history. The West Antarctic Ice Sheet has grown and collapsed in the past, so analyses of these core samples should help scientists assess the impact of such growth and contraction and just how quickly it has impacted past sea levels to better understand what is happening today and tomorrow.

Earth Science In the News: Aftermath of Eruptions