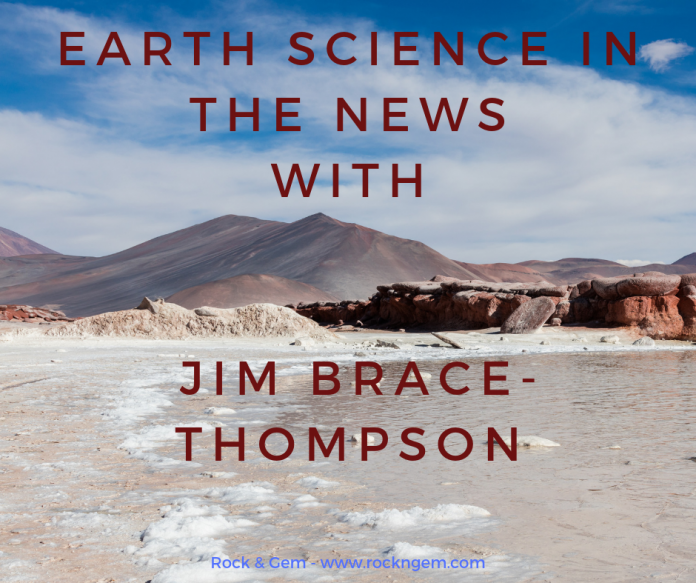 We live in an era when alternatives to petroleum-based energy are being demanded and eagerly sought. One big source increasingly eyed and used: lithium batteries. Per a report by Carolyn Gramling in a recent issue of Science New, global demand for lithium may well increase 300% within the coming decade alone. For instance, by 2030 some estimate we’ll have 24 million electric vehicles powered by lithium batteries, as compared to the 2 million cruising our streets today.

Currently, lithium for industrial use is sourced in three primary ways:  1) mining and crushing pegmatite rock deposits for the mineral spodumene and extracting lithium via acid and heat (an expensive, labor-intensive process); 2) pumping underground lithium-laced brine from beneath desert salt flats, allowing it to evaporate, then adding sodium carbonate and calcium hydroxide to concentrate the lithium (a much more cost-effective process); and 3) digging lithium-rich clay concentrated in dried up lake beds left within ancient supervolano calderas.

While lithium may help diminish the amount of carbon dioxide we humans pump into the atmosphere, it is not without problematic aftereffects of its own. For example, one big source for brine-based lithium is Chile’s Salar de Atacama region. Saline lagoons there are home to flamingo nesting preserves. It’s worried that sucking limited water for lithium production could destroy this habitat in such a dry, dry climate, not to mention the problem of toxic wastes left behind after lithium extraction.

In the rush to save Arctic polar bears from global warming, could we lose the pink flamingos of Chile? Yet another reminder that there are always trade-offs and seldom any quick or easy fixes.

Running Out of Sand?

Sand surrounds us. We stir it, mix it, and melt it to create asphalt, glass and other useful materials. Per a recent article in the journal Science, the only resource, by volume, that we consume more of is water. Like water, sand would seem to be endlessly abundant. After all, aren’t our vast deserts and long coastal beaches just filled with the stuff? Thus, it seems incomprehensible. Impossible, even. But a recent United Nations report says it’s so: we’re running out of sand?!

Useable sand, that is. For instance, you need a high degree of pure quartz sand to create glass. And you wouldn’t want to use the gypsum sand of New Mexico in a construction project given that gypsum is soluble in water. Thus, “good” sand is in high demand. With building booms hitting regions like Africa and Asia, that demand is putting a real strain on supply, a strain that the U.N. report says is “one of the major sustainability challenges of the 21st century”.

Not necessarily convinced by a U.N.-sponsored report?  Well, just last year journalist Vince Beiser published The World in a Grain: The Story of Sand and How It Transformed Civilization. Give it a read. It certainly opened my eyes!

The solar nebula was a swirling haze of gases and dust left in the immediate aftermath of the sun’s formation. The March/April issue of Earth magazine reported on a new study in the Journal of Geophysical Research concluding that as much as one to two percent of the water on Earth started out as hydrogen from the solar nebula. The lead author of the study, Jun Wu of Arizona State University, takes pains to note that they are not overthrowing current theories as to how water arrived on our planet; rather, their conclusion complements prevailing theory and suggests just one more potential source for our good old H2O.

Prevailing theory holds that most of Earth’s water arrived courtesy of comets, meteorites, and asteroids. Indeed, Japan’s Hayabusa mission brought back dust samples of the asteroid Itokawa to Earth in 2010, and recent analysis of those samples has revealed significant water content. Researchers Ziliang Jin and Maitrayee Bose (also of Arizona State University) say that this suggests as much as half the water volume in today’s oceans may have been derived from such small near-Earth objects!