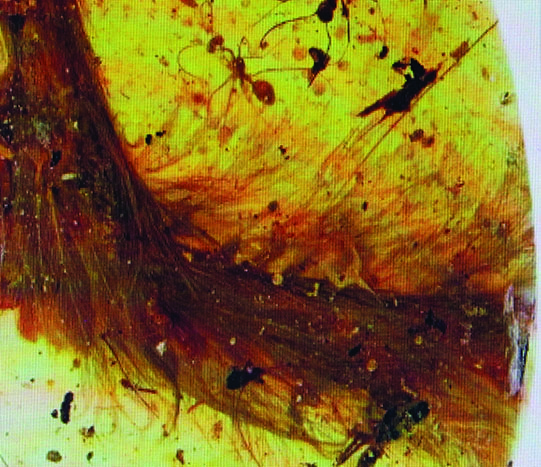 Amber has preserved many ancient life forms in exquisite detail. In 2015, Chinese paleontologist Xing Lida, searching through an amber market in northern Myanmar, came across what is arguably the most remarkable amber fossil ever found. Lida’s discovery was timely, for this particular piece of amber had already been roughly shaped and was about to be sold for jewelry use.

As described in a past issue of the journal Current Biology, this celebrated specimen is a 99 million-year-old, semitransparent, yellow chunk about the size of a dried apricot. Among its dozens of fossilized inclusions, mostly of insects and plant parts, is one that has astounded paleontologists: an inch-long section of a feathered dinosaur tail that represents the first positive association of well-developed feathers with dinosaurs.

The fossilized tail is that of a coelurosaur, a tiny, sparrow-sized, carnivorous dinosaur. Its extraordinary degree of preservation was possible only within amber. While most fossils are created through the physical processes of mineral replacement or molded impressions, amber forms through the entirely different chemical process of molecular polymerization.

Having neither a definite chemical composition nor an ordered crystal structure, amber is not a mineral, but an organic mineraloid. Chemically, it is an oxygenated hydrocarbon with a variable composition that consists roughly of 80% carbon, 10% oxygen, 9% hydrogen, and traces of sulfur and phosphorus.

Amber originates as tree resin, a solid or semisolid, organic hydrocarbon of vegetable origin. Certain trees exude resin primarily as a defense mechanism against fungal or insect attack. Although resin varies widely in composition and color, it is always a mix of organic acids, sugars, esters and terpenes; the last is a group of hydrocarbon compounds that is the key to amber fossilization.

But to fully develop into amber, further fossilization must occur in an anaerobic environment. In conditions of long-term burial devoid of free oxygen, resin transforms first to copal, a subfossil or partially polymerized resin with an amberlike color. If copal remains anaerobically buried for millions of years, its terpenes continue to polymerize, which eventually results in chemically stable amber.

The first true ambers originated some 230 million years ago. But only during the Cretaceous Period (65 million to 135 million years ago) did resin-exuding trees become sufficiently abundant to produce the resin necessary for the fossilization of large quantities of amber.

Although amber forms from polymerization, the fossilization of life-form inclusions takes place by desiccation. Because of its tackiness, newly exuded tree resin is a natu­ral trap for various plants and animals. For these life forms to be preserved, resin must be continuously exuded in layers to cover the trapped material, then enable the resin’s hygroscopic sugars to draw away water to completely desiccate the inclusions and preserve them in detailed, three-dimensional form.

That tiny, feathered coelurosaur tail preserved in amber is now being studied by scientists. Computerized-tomography (CT) scans have revealed eight vertebrae within the tail, while chemical analysis has detected ferrous iron, a decomposition product of the blood hemoglobin that was originally present in the soft tissue. The amber also preserved pigmentation that indicates with a high degree of certainty that the actual feather colors of the living dinosaur were chestnut brown and white.

Dr. Ryan McKellar, of the Royal Saskatchewan Museum, coauthor with Xing Lida of the Current Biology paper, says that finding soft tissue and decayed blood within the fossil does not mean we can clone dinosaurs. That, Dr. McKellar emphasizes, “is still in the realm of science fiction.”

Earth Science In the News: The Forests of Antarctica?