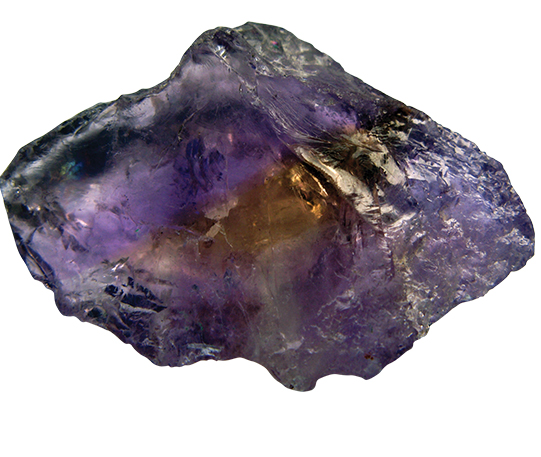 When the first ametrine crystals reached America from Bolivia, a vigorous argument broke out between those who said it was natural and others who said it had to be synthetic or treated. Today both arguments are correct.

The original ametrine crystals are natural and come from quartz veins or stringers in a metamorphic deposit in Bolivia. But we have also figured out how to produce ametrine through heat treatment, which means we can copy nature.

It is safe to say that ametrine is a unique form of quartz wherein two gem colors occur in the same crystal. This has given the gem industry and artists an entirely new treasure to carve, facet and use to create stunning jewelry and gem carvings. 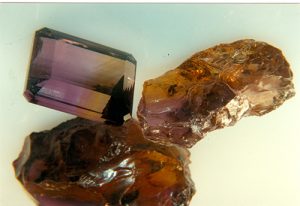 The introduction of ametrine into the modern gem market came as a surprise, though this unique Bolivian gem deposit had been known to the native peoples in the area for several hundred years. The problem is the area where the deposit is located is one of the most remote parts of Bolivia. Historical records show the local Ayoreo tribe had found and prized this unusual bi-color stone more than gold.

When the Spaniards conquered Bolivia and portions of western South America, they were mainly seeking gold and silver. The ametrine area where the Ayoreo tribe lived was so remote it was not even visited by Spaniards until the 1600s. Even today, it is not an easily accessed area.

Upon arriving in the region of the Ayoreo tribe, a soldier, Don Felipe de Urriola y Goitia, was among the group. Instead of finding gold and silver, all the Spaniards found were bi-colored stones that the locals held in high esteem. It was only when the tribe’s Princess Anhai fell in love with Don Felipe that an event happened that brought the gem to Europe.

The Princess was so in love with Don Felipe she gave him her treasured necklace, as a sign of her everlasting love. The necklace pendant was a lovely bi-colored stone. This gift gave rise to the “Legend of Princess Anahi and her love of Don Felipe.” Not finding any gold or silver, the Spaniards were soon ordered back to Spain, and Don Felipe had to return as well. This meant Princess Anahi had to stay behind, and that is when she gave the necklace to Felipe. The stone, with its beautiful yellow and violet colors, was a symbol of her undying love for him. There are different versions of what happened upon Don Felipe’s departure. Distraught over her separation from Don Felipe, either the Princess disappeared by going into the mine workings, which were the source of the gem or she just pined away. 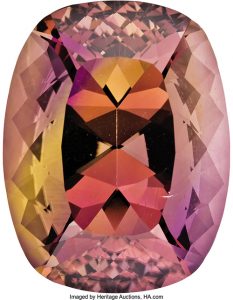 Ametrine is found in Russia, but not of gem quality anywhere else, so it is not unique as a gem but unique to Bolivia. The colors in the better stones occur in more or less equal amounts of violet amethyst and yellow citrine. Each colored area is distinctly separate from the colors alternating side by side in the same crystal. Properly cut across the vertical or “C” axis of the crystal the two colors are often seen as alternating triangular color sections, clearly showing the dramatic difference between two chemically different forms of quartz. Today skilled artists have developed cutting methods so these two colors can blend, to create a mixture of the two colors giving the impression of yet other colors, adding to the enhancement of the stone.

But how do we explain the triangular alternating color patterns in the stone that you see when you cut across the long axis of the crystal? The yellow citrine color alternating with the violet amethyst color with a sharp boundary between the two colors is quite distinct.

Remember, quartz is hexagonal in crystal form, so a natural quartz crystal will have six more or less equal sides or prism faces. Each of the six faces on a perfect quartz crystal is topped by triangular termination faces that come to a point. Small modifying faces can change that termination pattern, but internally the three horizontal axes control the internal triangular arrangement, which meets in the center of the crystal. When you slice ametrine across the vertical, to obtain a wafer of quartz, the quartz wafer shows this alternating triangle of violet and yellow-colored sections. Why is this the case?

Initially, it was thought such crystals were twinned. When a quartz crystal develops, the atoms form a crystal lattice structure that is a tetrahedron. These 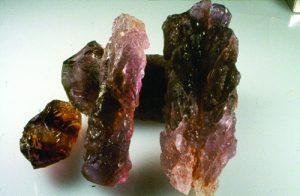 stack in an offset spiraling manner. Later studies showed that ametrine is not internally twinned, so the quartz is a single crystal, and some other mechanism is at work here. We now know those colors are the result of changes in the oxygen electron valence of the iron oxide, which is a common impurity in quartz. What causes this valence shift, causing the color variations in the oxygen, is due to temperature differences.

As earlier mentioned, there was quite a disagreement over ametrine when it first appeared in the late 1970s. This was resolved when someone visited the deposit and collected specimens from a productive vein. A decade later superb specimens, both crystals, and cut gems were being marketed as the mine came under development to produce gem material. The ten-year delay is explained when you consider the remoteness of the ametrine location, which could only be reached after an arduous land-water journey but now by air.

It is important to point out that the Gemological Institute of America in Carlsbad, California has created a superbly detailed report on ametrine and the mine site. Available is a very interesting prepared video, done by Robert Weldon, which you can view by searching online for “Ametrine Gemstone (natural ametrine stone”.

To understand what was going on for ametrine to form, you have to understand something about how quartz forms. Like so many crystals, quartz forms from silica-rich solutions that are hot enough to dissolve and hold the silicon dioxide molecules. The problem with quartz and any mineral that forms from a hot solution is the watery solution is non-discriminating. It dissolves and absorbs anything and everything it encounters.

Hydrothermal solutions, as they are called, are never pure. They are rich in a variety of elements and mineral molecules. Pure quartz molecules are simply silicon dioxide, but two elements are easily accommodated by the quartz molecule, aluminum, and iron, which can replace some of the silicon atoms. This sets up conditions needed for quartz to have color. 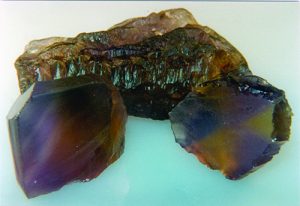 Given the unavoidable impurities in hydrothermal solutions, our interest here is with the iron that is an impurity in quartz. As explained earlier in one form, the iron oxide molecules cause quartz to take on a yellow color. In another form, the iron oxide gives quartz a lovely violet color. How can that be? Under normal conditions, an iron atom has an electron pattern of 2-8-14-2. But that next to the last orbital can give up one or two of its fourteen electrons, which then enter the last orbital, joining the two already there. So, iron’s last orbital can hold three or four electrons, each causing a color.

That shifting takes energy, which is absorbed from the light entering the quartz.
Remember, the quartz veins in the mine have formed under heat and pressure during the metamorphism of the host rock. So, the heat energy from metamorphic action gives those transferring electrons the energy they need, to shift creating a color.

But why the alternating yellow-violet colors? That is more difficult to explain. As the quartz crystals are developing, the internal geometry of the atoms may vary slightly, perhaps due to the presence of iron oxide. Iron atoms are a different size than silicon atoms, so slightly distort the atomic structure of the silicon dioxide. That may be part of the color pattern cause. We do know the number of valence electrons in each iron atom is important. Iron valence three gives citrine a yellow color. Iron valence four, in its outer orbital valence, causes the lovely violet color.

It takes more energy to achieve iron valence four than iron valance three. So, when the rock-forming process is ongoing, and the temperature varies higher and lower, that temperature difference results in one color, then the other forming and the crystal becomes bi-colored.

But something else must be going on within the quartz crystals in this deposit, to

give the quartz the lovely geometric zoning of two colors. This zoning pattern only occurs in about one-third of the quartz mined here, the rest of colorless, amethyst or opaque quartz.

Once scientists figured out what caused the citrine-amethyst colors in this quartz, it didn’t take them long to replicate it in the lab. You can not tell the difference between natural and treated ametrine visually, but pricing would make it obvious. Natural ametrine is very costly and understandably. The site is still remote. Even the early Spaniards did not enter the region early during their invasion. Even today, with an airstrip nearby, it is still a more than a three-hour flight to reach the site. The mine owner had to install an airstrip for obvious reasons of getting equipment in and product from the mine out to the market.

Of all the natural gems found on earth created by Mother Earth, no other gemstone offers such an intriguing, different, and certainly unique color pattern as ametrine.
Whatever has joined temperature variations to create ametrine, may be found out someday, until that time, we can just enjoy a lovely bi-colored quartz gem and its love story legend.

Artist recalls getting ‘starstruck’ by gemstones

Earth Science In the News: Rock Record and Ancestry