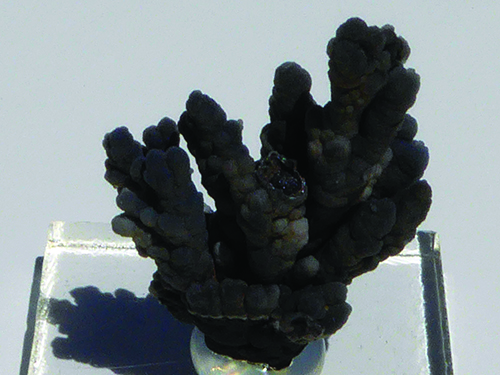 Technically speaking, allophane (hydrous aluminum silicate) is not a true mineral. In other words, it lacks a definite, defined chemical composition and/or a crystalline structure. Instead, it forms as masses with a variable chemical composition often composed of many impurities.

Such substances are referred to as “mineraloids” rather than true minerals. They commonly form in conditions of low temperatures and pressures during the process of chemical weathering of other minerals. Often, mineraloids are found as bubbly crusts, stalactites, or “flowstones” covering other rocks or minerals or filling cavities. Rather than form recognizable crystals, they tend to be amorphous, meaning “without form.”

Allophane is often translucent with a vitreous to earthy or waxy luster and leaves a white streak on a streak plate. Most often mineral guidebooks, if they include allophane at all, picture pale to sky-blue varieties. However, it comes in varied colors, including blue, greenish, gray, black, white, and brown. All leave a white streak on a ceramic streak plate and have a luster that varies from vitreous to greasy to earthy. You’ll often find allophane in such forms as botryoidal, stalactitic and earthy aggregates.

Notable localities for collecting allophane include the province of Quebec in Canada, Tasmania in Australia, Germany, Romania, Italy, Bolivia, Japan, and the U.S. states of Arizona, California, New Mexico, and Pennsylvania.