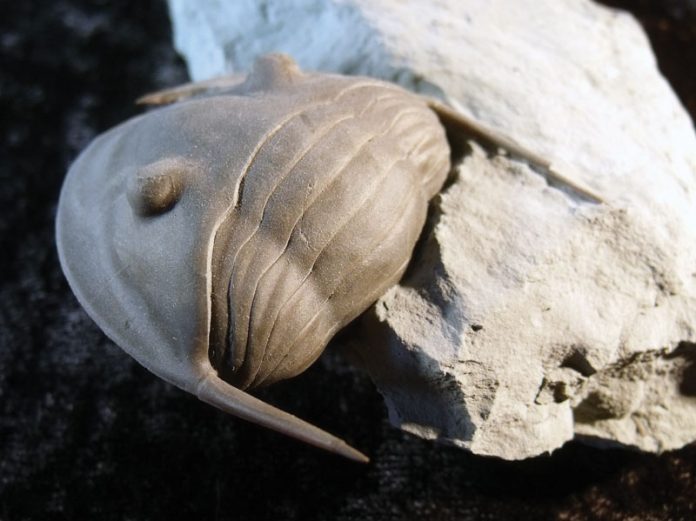 What are trilobite fossils? Southwestern Ohio hides the secrets of creatures that swam in the ancient Ordovician Seas that covered most of the state and parts of surrounding states. Isotelus trilobites once lived, thrived and died in what are now the rocks, cliffs, quarries and streambeds of Ohio.

Trilobites were arthropods with segmented bodies, paired jointed legs and an exoskeleton. Modern arthropods are made up of insects, spiders, millipedes and crustaceans.

The name Isotelus is Greek. Translated, isos means equal and telos means end. Isotelus was first described by John Locke in 1838. Locke was involved in the first serious study of the geology of Ohio in 1837 and 1838.

What are Trilobite Fossils? - Body Segments

The name trilobite derives from the three distinct body divisions or lobes running vertically through the body. There is one central, or axial lobe with two pleural lobes to either side. It is also divided three ways horizontally into the head section or cephalon, the body section or thorax and the tail section or pygidium.

Some species had long projecting spines emanating from various segments. In the case of Isotelus, it had long spines radiating backward from the sides of the head section, called genal spines. The head and tail sections were solid shields while the body was made up of individual segments, each with a corresponding pair of legs and gill branches.

Some species had as few as two body segments while others had as many as 60. Isotelus had eight body segments. With these segments, the trilobites were able to “enroll” or roll up their bodies, much like the modern-day pill bug or roly-poly. It is with this action called conglobation that they were able to pull the soft body tissues in for protection from danger.

They were covered by a thick exoskeleton, a skeleton on the outside of the body protecting the soft tissues including legs, gill branches and antennae. It also protected them from danger be it storms or predators.

What are Trilobite Fossils? - Fossil Remnants

Complete trilobites are not that common. 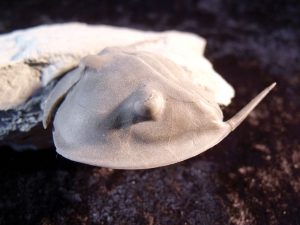 Trilobites were the first major creature on earth with complex eyes and many lenses. The eyes generally were crescent-shaped and sat high on the head section. As such it can be imagined they had nearly 360-degree vision. Some species had thousands of lenses in each eye. Some species were blind and had no eyes.

They were creatures that scurried about on the ocean floor eating decaying plant and animal material much as their relatives the horseshoe crabs, lobsters and shrimp do today. They had a mouthpart called a hypostome on the underside of the head section. One could almost imagine them as an undersea vacuum cleaner.

What are Trilobite Fossils? - Index Fossils

To date, there have been over 20,000 species named and described from the Cambrian Period some 521 to 252 million years ago when the Permian mass extinction erased almost 90% of life on earth. They ranged in size and shape from just under a quarter-inch to just over two feet long. They were quite a resilient and diverse group of creatures.

Trilobites are a well-known index fossil that can generally date the age of the rocks. Certain trilobites can be found in rocks of a certain geological age and no other, thus they are an index of the age of rocks.

School children played a major role in having this magnificent trilobite designated as the State Fossil of Ohio. After students learned of a large Isotelus being found at Huffman Dam near Dayton in 1919, third and fourth-grade students and teachers lobbied for the designation. But it wasn’t until June 20, 1985, that Ohio House Bill 145 finally designated the Isotelus as Ohio’s State Invertebrate Fossil.

Other states have designated various species of trilobites as their state fossil — Pennsylvania has chosen Phacops rana and Wisconsin the Calymene celebra. 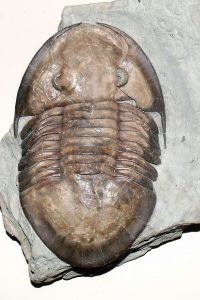 Isotelus trilobites and Isotelus pieces can be found in several locations in Ohio. One of the most popular areas is along Caesar Creek State Park southeast of Dayton. There are restrictions and a fossil collecting permit must be obtained from the park office before heading to the large spillway where many fossils can be found.

This story about what are trilobite fossils previously appeared in Rock & Gem magazine. Click here to subscribe! Story and photos by Joseph "PaleoJoe" Kchodl.