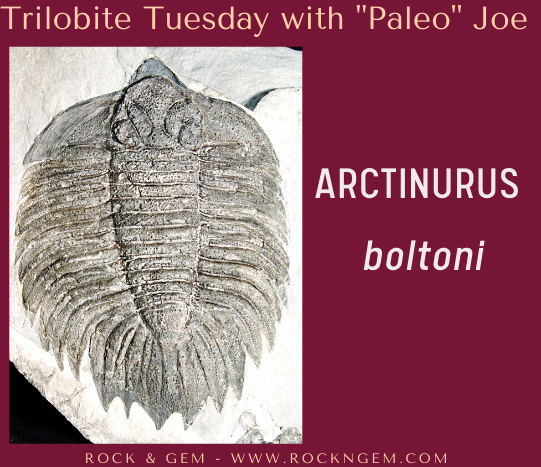 ARCTINURUS boltoni is a well known and dramatic trilobite found in the Silurian deposits of New York State. During the digging of the Erie Canal in the 1820’s, these trilobites were a unique find.

Trilobites are an extinct form of arthropod related to insects, crabs, crayfish and horseshoe crabs. These creatures are called trilobite due to the three distinct “lobes” running vertically through the body section.

Generally broad and rather flat in shape, the exoskeleton of the ARCTINURUS boltoni was ornamented with little tubercles. The thoracic segments end in a broad, short spine. The head section had a short forward projecting snout, presumably used to stir up the sediment on the ocean floor so it could feed. They could grow to an average of 11 inches but many are found just under 6 inches long. A highly desirable trilobite, it is a must for any trilobite collector.

A striking trilobite, the ARCTINURUS is most commonly found in the area around Middleport, New York. These trilobites can also be found in the Niagara Gorge.