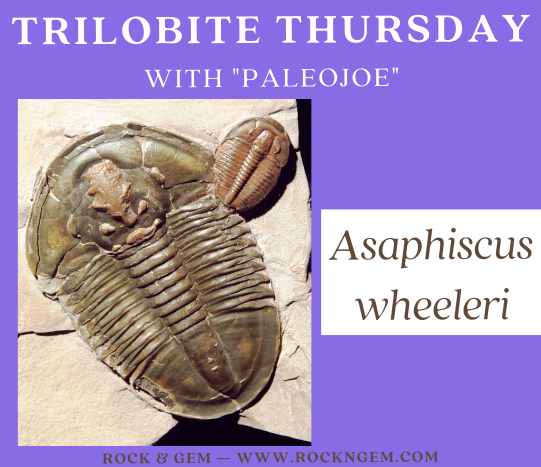 As you may be well aware, trilobites are an extinct form of arthropod related to insects, crabs, crayfish and horseshoe crabs. These creatures are called trilobite due to the three distinct “lobes” running vertically through the body section. However, are you familiar with one of the most frequently found trilobite fossils — Asaphiscus wheeleri?

A fairly uncommon trilobite of the Cambrian Period, this trilobite has a roughly semi-circular cephalon. Its body is elliptical in shape with a narrow axial lobe. The glabella (the mid-section of the trilobite - often convex in shape1) is furrowed with small crescent shaped eyes.

The thorax has average of between 7 and 11 thoracic segments. The pygidium is fairly large, broad and flat. The trilobite is often found in the sediment missing the free cheeks, part of the head section lost during molting, indicating that it is a molted exoskeleton. These trilobites could grow to around 2 inches long.

This featured photo of a Asaphiscus wheeleri fossil shows an exceptional natural association plate of trilobites that shared an ecosystem.