How many times have you ever considered what it might be like to live at a time when the continents were not separated as they are today, water was where land is today, and dinosaurs roamed the earth and soared through the skies?

If your response to that question is something along the lines of a few times, we think you'll enjoy the subject of this blog post, which features four fascinating fossils that recently changed hands at auction.

First up is the fossil of an ichthyosaur stenopterygius quadriscissus. Although you may be familiar with this species as a dinosaur, it is actually a marine reptile – more like an ancient lizard. This aquatic creature was correctly named, though, given that its name actually means "fish lizard" which it is, according to information provided in the auction catalog of Heritage Auctions' recent Nature & Science Platinum Night Auction.

This fossil was found in Holzmaden, Bavaria, Germany, at 11 feet in length; it appears to have been placed in a natural shale matrix during restoration years ago. According to the auction catalog, the piece does present what is believed to be a 100 percent natural skull and paddle and tail, with restoration of the vertebrae and ribs.

Talk about a sizable fossil! This dinosaur leg, the leg of a parasaurolophus species, to be exact, measures eight feet in height. That's just the leg – can you imagine the full size of this dinosaur? Neither can I.

This dinosaur to whom this leg belonged was affectionately known as a duck-billed variety of dinosaur, thanks to the curved crest that extended out of its head, according to information in the auction catalog prepared by Heritage Auctions. This example was discovered in the noted Judith River Formation of Montana, and the species is said to date to the Cretaceous period. According to the lot description, some restoration has been done on this fossil, but it reportedly contains 90 percent original bone.

Fossils can also include items other than animals, such is the example of this rarely seen 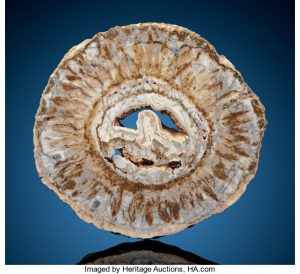 petrified cycad slab. This ancient species of seed plant has what is reportedly a "very long fossil history." Other factors that make this piece special include the locality of its discovery, Colorado, which is outside the normal destination for fossils such as the cycadeoidea.

Additionally, the design and blend of white, blue, and brown coloring are unique to this piece, which also presents at a rather large 11 inches in diameter. 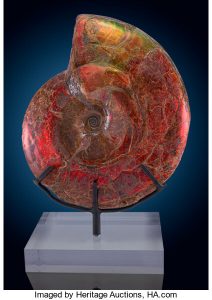 The Bearpaw Formation of Alberta, Canada, is the locality of many discoveries of ammonite varieties of cephalopod fossils. This locality's condition creates an unparalleled type of preservation that allows for "Gem" ammonites with incredible iridescent colors to come to the surface.

This find does double duty as both a fossil and a gemstone. This beauty, which measures 25 inches in diameter, is a remarkable finding whether the goal is fossil hunting or gemstone discovery.

This remarkable find brought $35,000 at the March 2021 auction presented by Heritage Auctions.

Keep an eye out for future fossil and geological auctions at Heritage Auctions by visiting www.ha.com.

Mining And Learning On the Move