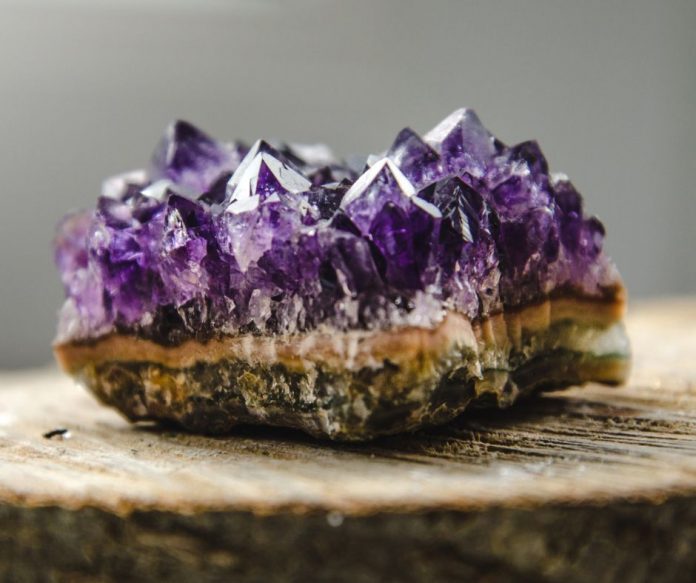 Amethyst crystals are popular in jewelry as February's birthstone and metaphysically to bring calm and reduce anxiety. The term amethyst comes from the Greek word "a-methystos," which loosely translated means "not drunk."

Exposure to heat, especially when set in direct sunlight, often turns this violet-purple quartz mineral to shades of yellow, orange-brown, occasionally clear or colorless. Sometimes, when amethyst is used as a gemstone, heat is purposely applied.

Amethyst is popular with almost everyone. It's found in jewelry and art. It's also found as a specimen in collections of beginners and the most experienced. Amethyst is also used as a decorative piece in many homes and offices.

Amethyst Crystals Through the Ages

Archaeological research reveals examples of amethyst in decorative pieces created by prehistoric humans. The earliest recorded mentions of amethyst appear in ancient Greece and Rome. It was believed that wearing amethyst would aid in keeping one clear-headed and quick-witted. Kind of strange considering its Greek translation!

Amethyst also appears in references regarding royal history, legends, religions and mythology. Amethyst was revered for generations. It was viewed as a gemstone and a mineral for the wealthy, clergy and the elite. As more sources of amethyst were discovered and those discoveries became more frequent, its availability increased and its popularity increased.

As February's birthstone, amethyst crystals bring something beautiful to help offset the shorter days, colder temperatures and lack of sunshine that happen during this cold, winter month.