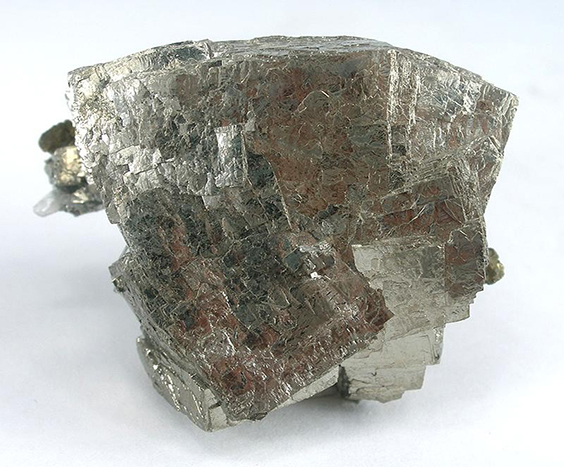 Mention iron disulfide and the mineral that comes to mind is pyrite. And well it should, for pyrite, widely collected and the most abundant of all sulfide minerals, is well-known for its brassy color, metallic luster, beautifully developed cubic and dodecahedral crystals, and fascinating history as a fire-starter and a source of sulfur.

Like pyrite, marcasite is also an iron disulfide (FeS2), albeit one with much less familiarity. Marcasite and pyrite are polymorphs, minerals with identical chemistries but different crystal structures.

Pyrite crystallizes in the cubic system, marcasite in the orthorhombic system. Both minerals are generally similar in their brassy colors, metallic luster, hardness, and density, but differ substantially in origin and levels of chemical stability.

Pyrite usually forms in conditions of high temperature and pressure, and in chemical environments of low acidity or even alkalinity that enable iron and sulfur ions to join together in compact, cubic arrangements with relatively strong atomic bonding.

Conversely, marcasite crystallizes in low temperatures and pressure, and in highly acidic environments in which iron and sulfur ions join in a looser orthorhombic structure with weaker atomic bonding. It forms crystals, nodules, and concretions in sedimentary rock, most often in strata of shale, limestone, peat, and coal. Marcasite frequently occurs as twinned, dipyramidal, orthorhombic crystals with coxcomb or spear-like habits.

With its weak atomic bonding, marcasite is unstable and susceptible to rapid oxidation, especially in wet or humid conditions. It eventually oxidizes into melanterite (FeSO4·7H20), a crumbly, yellowish-white hydrous iron sulfate. This type of oxidation reaction, known as “pyrite decay,” produces heat, a disagreeable sulfur odor, and sulfuric acid.

Marcasite was long confused with pyrite. In antiquity, both served as “fire-starters” that emitted sparks when struck with iron or flint. When subjected to high-impulse mechanical stress, both marcasite and pyrite break their covalent, iron-sulfur bonds and release heat and light energy in the form of sparks.

The word “marcasite” stems from the Arabic markaschatsa, meaning “firestone” and referring generally to pyrite and other similarly colored, metallic minerals. Marcasite and pyrite were thought to be the same mineral until the early 1800s, when crystallography became a key to mineralogical classification. Although the orthorhombic form of iron disulfide was formally named “marcasite” in 1845, the names “marcasite” and “pyrite” continued to be used interchangeably.

The premier marcasite source is the Komo?any lignite mine in the western Czech Republic. Komo?any is located within the North Bohemian Brown Coal Basin, a 100-mile-long, coal-rich, geological basin.

During the warmer, wetter climate of the Miocene Epoch some 20 million years ago, dense forests and profusely vegetated swamps covered this region Large masses of organic matter became buried in swamps, underwent a process of coalification, and converted to lignite, a low-grade form of coal.

The ready susceptibility of marcasite to oxidize into basic iron oxides and sulfuric acid has caused serious environmental problems at Komo?any, an extensively mined area that is Europe’s worst example of mine-drainage pollution.

Because marcasite is chemically unstable, it is not suitable for jewelry use. Nevertheless, its name is still used in the jewelry trade. In the late 1800s, mourning jewelry, a style that emphasized schorl, jet, and pyrite beads, gained great popularity, especially in Victorian-era England.

But pyrite, then a major industrial source of sulfur, was saddled with a blue-collar image that had little appeal to jewelry buyers. Jewelers chose instead to label their pyrite beads as “marcasite,” a name rooted in the Arabic that conjured images of the mysterious Middle East. This marketing usage, however misleading, continues today and explains why our modern “marcasite”-bead jewelry is really made of pyrite.

Making Memories of a Rockhounding Lifetime