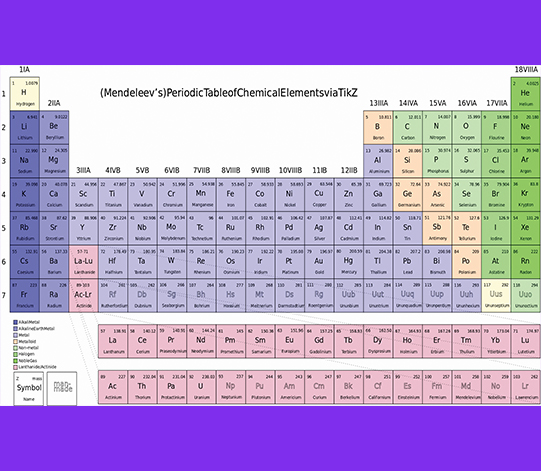 In December 2017, at the United Nations General Assembly, 72nd session, in New York City, the membership proclaimed the year 2019 to be International Year of the Periodic Table of Chemical Elements.

Collectors know there is nothing more closely related to minerals than the Periodic Table of Elements. Every mineral species is made up of a particular set of chemical elements that make it what it is. Change the elements in any way, and you change the mineral species to one variety or another. Discovery of the chemical elements was due largely to chemical experiments on minerals by alchemists and scientists. This suggests that the year 2019 should highlight the relationship of minerals to the Periodic Table of Chemical Elements.

The curiosity of humans led to investigation of minerals and discovery of their chemical makeup. We should pay homage to those who suffered ailments, even death, in the search for elements in minerals. An example of this dedication is the search for fluorine element #9. It is the most chemically active element, so chemically active that it was nearly impossible to capture and isolate in a free state. Scientists finally had to make their lab equipment of fluorite, CaF2. The French scientist Henri Moissan is credited with the successful capture of fluorine, but he died later as result of his work.

The theory that all matter was made up of four elements – earth, air, fire, and water – prevailed in ancient times. There were a few natural substances – gold, silver, mercury, copper, sulfur, carbon – found in a natural form, but people believed they, too, were made of the four basic elements. People believed if they could discover how these minerals formed from earth, air, fire, and water, they could change or mutate useless materials into gold. This mistaken belief led to the appearance of alchemists, pseudo-scientists who searched for the elixir of life believed to change lead into gold.

In the alchemists’ search for the elixir of life, they investigated just about everything on earth in hope of producing gold. They did discover some useful substances, and one alchemist, Hennig Brand, did discover a then-unknown element, phosphorus, as the first ever element extracted from a compound.

Exploring the 'Elixir of Life'

In 1669, the German alchemist, Henning Brand, was searching for the elixir of life. While looking through his barn, he saw a substance on the floor that he had not yet examined. He gathered it and worked all day testing and using a retort, a device used for distillation, in an effort to extract the mysterious elixir he sought.

After retiring for the night, he realized there was a faint glow coming from his work area. Excited, he went to his lab and in the bottom of the retort was a small bead of waxy-looking material that glowed. He thought he had found the elixir of life. Without realizing it, he had extracted the then-unknown natural element phosphorus from cow urine. This in no way is the reason the Periodic Table symbol for phosphorus is “P.”

As modern science emerged and scientists made discovery after discovery of the properties of native elements, they were named and given symbols. The science language of the early times was Latin, so elements were given symbols based on their names.

Some of today’s symbols reflect the ancient Latin names. Most, like

oxygen’s symbol of “O,” do not. If you check the Table you’ll, see many of those Latin name symbols: gold (Au) for aurum, lead (Pb) for plumbum, copper (Cu) for cuprum, mercury (Hg) for hyargyrum, iron (Fe) for ferum, silver (Ag) for argentum, tin (Sn) for stanum, antimony (Sb) for stibnium, sodium (Na) for natrium, and potassium (K) for kalum. The German name for tungsten was wolfram. Man-made, synthetic elements recognize scientists or scientific institutions by name and symbol.

When you walk into a science classroom, you see the chemical symbols on a large chart on the wall. Each box is numbered in order from 1 to 92 and beyond. Your immediate thought is probably, “What the heck is that?” You are looking at a scientific tool, an information chart that is one of the most useful charted systems in chemistry. It is the Periodic Table of the Chemical Elements.

The clue word in that title is the word “Periodic.” The chart arranges the elements according to the periodic repetition of certain properties the elements exhibit.

For example, elements are listed according to the number of protons each atom of an element contains. An example is hydrogen. The number “1” has one positively charged proton in its nucleus. Helium, the number “2” represents two positive protons in its nucleus and so on up to Uranium 92 with 92 protons in the nucleus of one uranium atom.

This number also tells you the number of negatively charged electrons that surround the positive nucleus in an electrically balanced or neutral atom of an element. Another number in each element’s box is that element’s average atomic weight.

Electrons are considered weightless, but why are the atomic weight numbers not whole numbers? These uneven atomic weight numbers are a clue to another atomic particle found in the nuclei of all elements. We call such particles neutrons, as they carry no electric charge, only mass. Though hydrogen has one proton and one electron, some of their atoms can also contain a neutron or two. Not all hydrogen atoms have neutrons, but a few do.

The Periodic Table is a tool of science, which means it didn’t just appear. It was built on the research and efforts of many scientists throughout time. Of these scientists, two noteworthy individuals are credited with developing the first useful and accurate Periodic Table. They are Russia’s Dimitri Mendeleev, or Mendeleeff, and Germany’s Julius Lothar Meyer. Each developed his own periodic table, but eventually the practice was to focus on Mendeleev’s table.

In the 1860s, Mendeleev published what we accept today as the Periodic Table, with important modifications. Dimitri’s table was incomplete, as only 55 elements were known at the time. He arranged them in an orderly table based on their physical and chemical properties. He realized that there was a repetitive nature or grouping of properties of elements so they could be arranged together.

When he arranged the known elements, he also realized some elements seemed to be missing and should be there but had not yet been discovered. Using the properties of elements nearest the gaps, he was able to predict the properties of undiscovered elements. With great accuracy he identified the properties of three yet-to-be-discovered elements. He named them ekasilicon, elekaboron, and ekaaluminium. These were later discovered using the predicted properties and were named germanium (#32), scandium (#21) and gallium (#31). Using Mendeleev’s Period Table of Chemical Elements, scientists were guided in their research as they sought and found missing elements.

Recognizing the relationship of properties of certain elements, we could actually group those elements in the columns and rows of elements on the Table. This is why a Periodic Table of Chemical Elements has such an unusual shape of rows and columns. It is a very orderly arrangement once you understand group relationships.

Mendeleev listed his elements in columns, suggesting they had a vertical relationship. If you look at a modern Periodic Table, in the last column you see helium, neon, argon, krypton, xenon, and radon. They are purposely listed in that column because they all show a chemical resistance to forming compounds. They are called the inert or noble gases because they almost never combine with other elements to form compounds.

If you study the electron arrangement of this group of noble gases, you find something surprising.

Except for helium, which only has two electrons, all members of the noble gases, regardless of how many electrons they have, always each have eight electrons in the last or outer orbital or shell.

On the opposite end of the Periodic Table is the column containing hydrogen, lithium, sodium, potassium, rubidium, cesium, and francium. We call these the alkali metal group. These elements react chemically alike, and many of their properties match.

Obviously, the outer shell electrons must be critical to the chemical

activity of the elements. Those elements whose outer orbital has fewer than four electrons in it are chemically active and are called metals. They are grouped to the left of the Table.

Elements whose outer orbital have more than four electrons in their outer shells are grouped to the right side of the Table and are considered non-metals. We give those outer orbital electrons a special name if they participate in chemical activities. We call them valence electrons, a subject we’ll focus on in a future “On the Rocks” column.

As I’ve stated, non-metal elements have more than four electrons in their outer orbital shell and are on the right side of the Table. But what about those elements whose outer orbital contain exactly four electrons? It should be no surprise that they sometimes act like a metal and sometimes act like a non-metal. Carbon is a good example. Carbon has some metal properties. It is one of the metalloid elements.

To help identify metalloids using the Table, picture a zig-zag starting by boron and moving down between the elements ending between bismuth and astatine. The metalloids are close to that line.

In another “On the Rocks” column, I will delve into the idea of valence electrons. They are critical in forming mineral compounds. We’ll also discuss transition metal elements, which is critical in giving some of our most admired minerals and gems their wonderful colors.

Bench Tips: Fitting a Small Cab into a Larger Cab