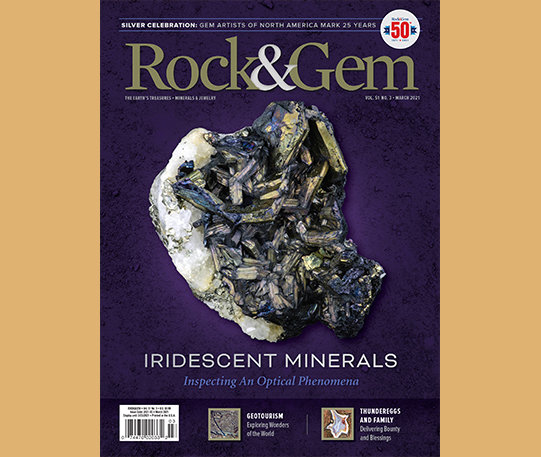 Below is a snapshot of some of the topics and interests you can expect to see in the pages of the March 2021 issue of Rock & Gem. Plus, we've included some sample pages for you to enjoy.

• THE ESSENCE OF IRIDESCENCE: Understanding the "Rainbow" In the Mineral World. By Steve Voynick.

• EPIDOTE: A Beautiful Product of Metamorphism. By Bob Jones

• GEOTOURISM: A Unique and Intriguing Approach to Exploring Our World. By Jim Brace-Thompson

In addition, you'll find the following regular R&G columns: Bench Tips with Bob Rush, Rock Science with Steve Voynick, What to Cut with Russ Kaniuth, On the Rocks with Bob Jones, Rock & Gem Kids and Earth Science In the News with Jim Brace-Thompson, Sneak Peek: Opals, The Road Report with Helen Serras-Herman, Show Dates, and the always popular Parting Shot.

Tap Into Your Inner Fossil Hunter