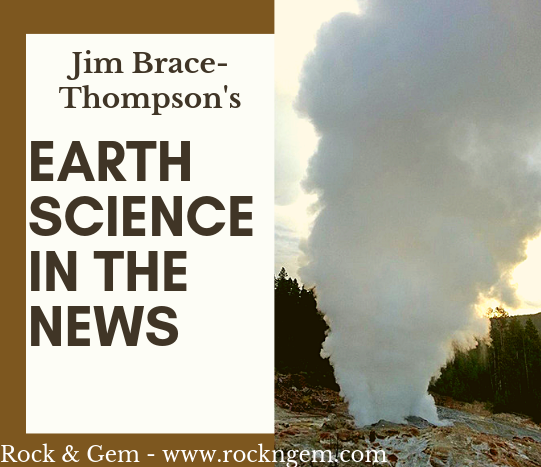 In the Norris Geyser Basin of Yellowstone National Park (USA), Steamboat Geyser is the biggest geyser. Recently, it has become a very active one, too. It is said to be the world’s tallest currently-active geyser, issuing columns of steam and boiling water up to 300 feet in the air from its northern vent. (It also has a southern vent 20 feet downwind that is a bit more subdued.) In addition to impressive 300-foot eruptions, some lucky but disappointed viewers have seen spouts as low as 10 feet. The duration of each event has varied from 3 to 40 minutes.

In the past, there may have been as many as 54 years between Steamboat Geyser eruptions. In fact, it has often been said that Steamboat’s eruptions are “entirely unpredictable.” But lately, that eruption rate has been as little as 3 days. In 2018, it erupted 32 times (a record for a single year), and thus far in 2019, it has erupted 24 times. Prior periods of increased activity were recorded in the early 1980s and the 1960s. For instance, 1964—when I visited Yellowstone as a little kid—saw 29 eruptions. (I’ve looked over family photos and can’t say if we were there to witness any one of them…)

Tabloid-oriented newspapers and websites ominously warn that this, most certainly, is a sign of an impending disastrous eruption from the Yellowstone volcanic complex as a whole. That eruption, they say, will kill 87,000 people outright, and its after-effects will plunge us into an ash-laden nuclear winter, making most of America a “dead zone.” Time to head for the hills, such publications maintain.

Truth be told, geologists have no idea whether the recent uptick in geyser activity has any link with a potential eruption of the so-called Yellowstone Caldera. In fact, per the USGS Volcano Hazards Program website, Steamboat Geyser’s increased activities likely “do not have any implications for future volcanic activity at Yellowstone.”

So when a tabloid newspaper warns you to head for the hills, use that newspaper to wrap your fish for tonight’s dinner. Then, stay put and enjoy many more wonderful dinners to come.

Rocks Beware! Plants Are Out to Eat You!

Places such hot, dry rocky deserts should be devoid of plants, which need nutrients via mineral-rich soils derived from rocks that have already broken down and combined with organics in moist environments. But at one spot in Brazil, scientists have reported plants that are thriving by sending roots directly into rocks in search of the minerals they need to live.

Per an article in the journal Functional Ecology, two species of a plant in the genus Barbacenia have tiny hairlike structures sprouting from their roots. Such structures secrete acids, thus dissolving phosphates and other nutrients for plant roots to absorb.

These plants don’t just follow natural fissures in the rocks, soaking up nutrients from dirt in the cracks. Rather, they actively grow into the solid rock itself, sometimes as much as 10 centimeters deep. To collect such plants, botanists need geology rock picks and chisels.

Scientists are excited about such rock-eating plants. They hope they might genetically transfer the plants’ unique properties for rock eating into crop plants, thereby allowing humans to cultivate vital food crops such as barley, corn, and wheat even in sandy or rocky soils currently inhospitable to agriculture.

With all the Apollo anniversary hullabaloo, eyes once again are turning to the Moon. This time, though, the goal is to use the Moon as a way station for manned missions to Mars. When humans finally arrive at the Red Planet, it turns out—as on Earth—they may need to deal with greenhouse gases!

One gas, in particular, has made the news: methane.

NASA’s Mars rover Curiosity recently reported an unexpected spike in levels of methane in the Martian atmosphere. The spike disappeared as quickly as it came. Such upticks have been reported off-and-on in recent years of Martian exploration, and they seem to occur seasonally. Here on Earth, seasonal warm cycles see spring and summer explosions of plant growth and associated differences in gas emissions into our atmosphere.

Tabloids all across our Earth are pointing out how methane is a key indicator of life on Earth; for instance, a byproduct of cows munching on grass or microbes munching on, well, whatever it is that microbes munch on. The seasonal uptick in methane, tabloids say, is most certainly evidence of life laying out towels on the sand and blooming in the Martian summer sun.

Certainly, organic biological processes produce methane. But then again, so do nonbiological geochemical processes. For instance, a warm-season in Mars might melt underground water deposits, which then react with minerals in the rock, thus briefly releasing methane.

The whole situation is complicated by the fact that methane is highly unstable under ultraviolet light, which literally bathes the Martian surface. Thus, as quickly as it is produced on Mars, methane is hit and eradicated.

One thing is certain: because of this fact, periodic short-term spikes of methane in a methane-hostile environment indicate that methane is being actively produced on Mars. Is such production from biological or geological processes? The answer may need to wait for that way station on the Moon and an eventual human landing on Mars itself.

Earth Science In the News: All Volcano Issue