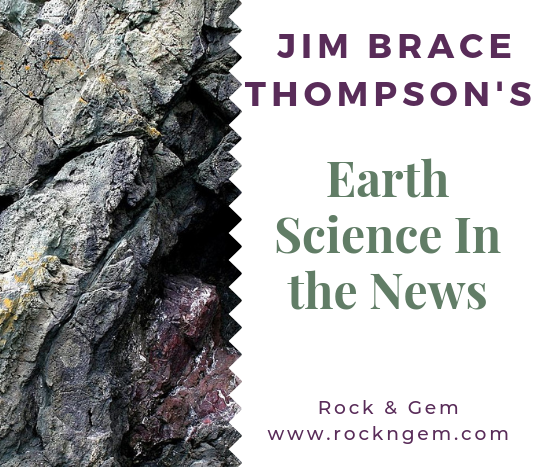 Many theories have been offered as to what initiates and control cycles of glaciation on Earth. Some have been literally out-of-this-world. For instance, Milankovitch cycles suggest that large-scale climate swings are due to variations in the Earth’s tilt and orbit as it swings around our Sun, resulting in variations in solar radiation hitting our planet. This, in turn, causes swings between cold and hot spells. Such cycles also are said to be influenced by the gravitational pull that Jupiter and Saturn exert on our orbit.

Other theories have been more down-to-earth, posting changes in “sources” and “sinks” of carbon dioxide here on Earth itself. Volcanic eruptions, degassing at mid-ocean ridges, the metamorphosis of carbonate rocks, etc., all release carbon dioxide into the atmosphere, thus making them sources. The more carbon dioxide they pump into the air, the warmer the climate.

Sinks, on the other hand, lock up carbon dioxide, and one major sink involves chemical weathering of certain rocks, i.e., mafic and ultramafic rocks. In a recent issue of the journal Science, geologist Francis Macdonald and colleagues suggest that plate tectonics drives glacial cycles when island arcs collide with continents in tropical zones. In arc-continent collisions, mafic and ultramafic rocks are pushed up and exposed to weathering processes. These processes send carbon to the ocean. There, it becomes locked up in carbonate sediments, thus cooling the Earth and leading to glaciation.

Such weathering processes are intensified in warm, wet areas at low, tropical latitudes on our globe. To buttress their theory, these scientists looked at past periods of glaciation concerning reconstructions of past locations of continents and arcs, and they found a strong correlation between arc-continent collisions within tropical zones and the onset of glaciation during the Ordovician, Devonian, and Carboniferous-Permian Periods and late Cenozoic time.

With all the complexities of planet-wide climate change, you can bet this theory won’t be the last!

One of the first earth resources our human ancestors most likely reached for was a fist-sized rock either to toss at a sabertooth cat or to crack open a tough nut—or to bonk a belligerent husband over the head.

Similarly, chimpanzees and monkeys have long been observed to reach for rocks as pounding tools when confronted with hard-shelled nuts or tough-skinned fruits. Now, for the first time, archeologists have documented how the choice of stones shifted over time for one species.

In the journal Nature Ecology & Evolution, primatologist Tiago Falótico teamed with archeologist Tomos Proffitt and others to excavate and analyze stones used by capuchin monkeys over 3,000 years in northeastern Brazil. Such research is difficult because archeological sites linked to monkeys are rare—and have rarely been sought. And it can be difficult to differentiate rocks used as tools from your everyday rock. Archeologists have keyed into what to look for by observing locations where capuchins, macaque monkeys, and chimpanzees use stone tools today.

At the Brazilian site in Serra da Capivara National Park, where capuchins still pound away, four distinct sediment layers yielded what have been interpreted to be capuchin stone artifacts, complete with radiocarbon dating thanks to charred wood in the layers. Analysis and comparison of the stones from each layer show a distinct shift from the use of small to large stones over time. It’s believed capuchins were initially smashing small seeds or fruits, then shifted to shelled nuts and fruits with tougher rinds. Finally, starting 100 years ago, they shifted again, this time to slightly smaller stones to crack cashew nuts, which capuchins still enjoy today.

Why the shifts? One theory is that local vegetation changed over time, requiring capuchins to shift tools to crack open different food sources. The other theory suggests that different populations of capuchins moved in and out of the area and that the different populations used different “tool kits,” so to speak. No word yet, though, on whether capuchin wives have been known to bonk capuchin husbands on the head and what size stones they use for that!

There was a time when the eyes of paleontologists focused on 541 million years ago and the so-called “Cambrian explosion.” This marked the sudden appearance of today’s complex life after several billion years of cyanobacteria, algae, and other microorganisms.

However, there were signs that the explosion may not have been so sudden as suggested. Here and there were tantalizing hints of a “big bang” of complex multicellular life preceding the Cambrian. But such critters lacked hard parts, such as shells, carapaces, skeletal structures, or teeth. Thus, they were poorly preserved, and they were few and far between.Folks didn’t know what to make of them. Were they plants? Animals? Something completely different? Most paleontologists suggested they were part of a dead-end evolutionary experiment to 'Nowhereland.'

Despite their lack of sex appeal (most have been described as “immobile bags,” disks and fronds), these Precambrian critters garnered their fair share of devotees among dedicated paleontologists. Over the years, more and more locations and more and more interesting specimens were uncovered, enough such that nowadays these fossils have earned their moniker of the “Ediacaran biota” and their geological period, the Ediacaran Period dated at 635 to 541 million years ago.

This past year, the Ediacaran big bang has been featured in journals such as Science or Nature Ecology & Evolution and more popular magazines like Scientific American. The Ediacaran biota, it would seem, has truly come of age. More than 100 genera have now been formally described, including some that did indeed develop external and internal mineralized skeletons. Far from being evolutionary dead ends, some of these forms seem to have slipped across the boundary and survived into the Cambrian Period while others may well have been precursors to hard-shelled Cambrian animals—and the animals we see all around us today!

If not a “big bang,” per se, the Cambrian explosion was certainly preceded by a long, interesting, sizzling-hot fuse!