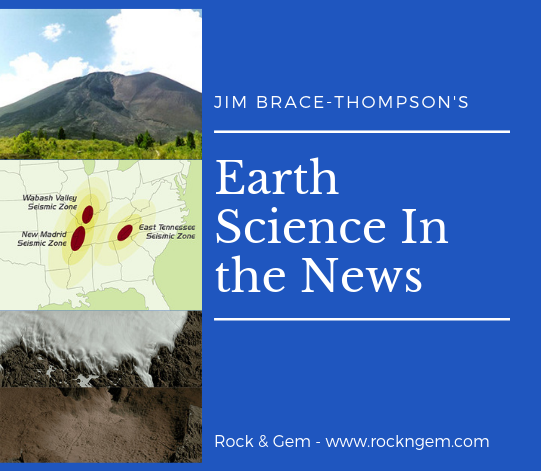 On Wednesday, December 12, folks in Tennessee and Georgia were jolted awake in the wee morning hours by a magnitude 4.4 earthquake centered near Decatur, Tennessee. It was quickly followed by a 3.3 aftershock. Aftershocks continued, including one a week later charted at 2.1. Shaking stretched from Nashville, Tennessee, north into Kentucky, and south to Atlanta, Georgia. At least five southeastern states reported tremors.

While area residents may have been surprised, the region is no stranger to earthquakes due to what’s called the Eastern Tennessee Seismic Zone. It’s one of the most seismically active areas in the southeastern U.S., but most earthquakes emanating from it are generally weak and go unnoticed.

Although the U.S. Geological Survey noted that this is the strongest quake to hit the region in 45 years, fortunately there were no reports of injuries nor major damage. The worst results? Items like photo frames were shaken from shelves and people were shaken awake!

Yet Another Volcano Erupts on the Ring of Fire

The “Ring of Fire” is at it yet again on the Indonesian island of Sulawesi. Mount Soputan, a stratovolcano standing 5,853 feet (1,784 meters), is one of the most active of the country’s 120 volcanoes. It fired up and let loose twice on December 16, shooting columns of thick ash 25,000 feet into the sky.

throughout the night and slid down the slopes of the volcano. Homes and cars were covered in ash, and folks miles away from the volcano donned face masks. Fortunately, area residents had already been forewarned and evacuated from a 2.5-mile exclusion zone set up around the crater.

Mount Soputan erupted just two month prior, on October 3, one week after a powerful earthquake and tsunami devastated portions of Sulawesi. Residents, it would seem, cannot catch a break from the powerful geologic forces underlying their island.

After conducting ice-penetrating radar analyses, scientists have announced discovery of a meteorite crater hidden beneath ice sheets of Hiawatha Glacier in northwest Greenland. Debris from the crater apparently is intermixed with ice. This suggests the impact occurred relatively recently, perhaps just 13,000 years ago during the Pleistocene Epoch when Greenland was already covered by glaciers and while modern humans inhabited the planet.

Based on the size of the crater (31 kilometers wide), scientists say the impacting meteor may have had a diameter of 1.5 kilometers. In addition to radar images peering through the ice sheet, sediments from a river draining from beneath the ice have yielded glassy beads plus grains of quartz that were physically “shocked”—two items that could only have been caused only by a massive extraterrestrial impact.

As a final bit of evidence, large iron meteorites have been collected in the past from northwest Greenland. One—long used by native Inuits as a source of iron for tools—now rests in a courtyard of the Geological Museum in Copenhagen, Denmark.

Some hail this as confirmation of a theory posed a decade ago. Per that theory, Earth was thawing out from the Pleistocene Ice Ages when, suddenly, it was plunged back into a deep freeze by a meteiorite, asteroid, or comet that ushered in the “Younger Dryas” period and that also caused the extinction of large animals (or megafauna: mammoths, giant ground sloths, cave bears, sabertooth cats, etc.) across the Northern Hemisphere. Advocates of this theory pointed to the mass extinction event, along with layers of sediments that seemed to show evidence of massive continent-wide fires with specks of extraterrestrial iridium.

Those theorists were missing just one thing: a “smoking gun” crater. Well, per advocates, this may be it.

Others caution that the exact age of the crater is yet to be determined. It may be as old as 100,000 years, well before the megafaunal extinction. Stay tuned for more facts to be revealed from beneath the ice!

New Stories from “the Third Pole”