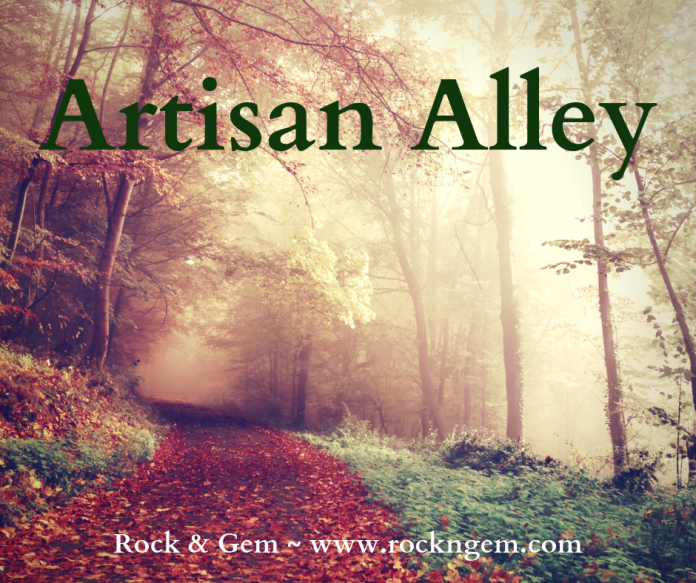 “Always be on the lookout for the presence of wonder.” ~E.B. White

It is our humble opinion that among those who appreciate rocks, gems, minerals, fossils, lapidary, and silversmithing a sense of wonder is ever present. What a remarkable and fortunate gift.

When it comes to collaborative creations like those featured in the Artisan Alley blog/column the presence of wonder is shared between the lapidary artist, silversmith, recipient of the creation, and anyone with the opportunity to view the creations. That’s a lot of wonder flowing through humanity, as people share a common appreciation.

In addition to enjoying the talents of artists and smiths, we learn about the inspiration behind their work in the piece. The brilliant pieces showcased in the Artisan Alley blog/column are the genius of silversmiths and lapidary artists who are members of the Stone and Silver Facebook group. 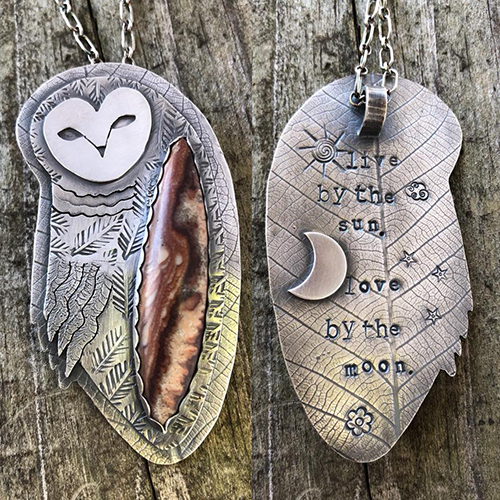 It stands to reason that inspiration for a collaborative piece such as this would include multiple factors, as explained by The Dirt Road Daisy.
“I’d just say my major inspiration is nature, owls, leaves, and words. Owls, I think of as being more nocturnal, so, the quote on the back goes with the night and the day.

“The Rolling Hills Dolomite was also an inspiration because the pattern in the stone itself reminded me of the feathers of an owl.”

Live by the sun. Love by the moon. Indeed. 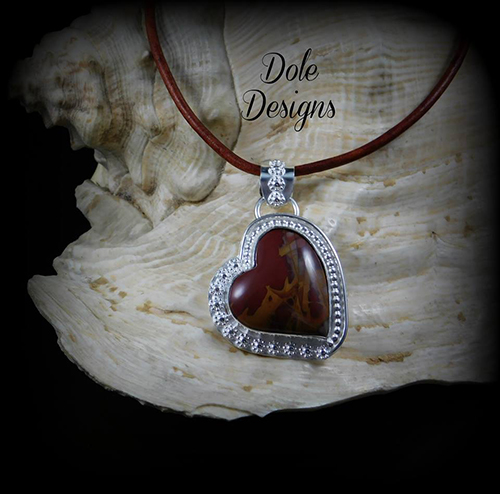 Within many solid unions the involved parties are striking individually, and when they come together they complement and enhance each other’s attributes. Such is the case with this piece.

“The beauty, depth, and character of the stone was an inspiration in itself, however, the shape was fun and so I wanted to highlight it,” states Cheryl Ruby Dole. “I added the trim that was a bit different on each side and tied it all together with an accenting bail that would hang bring attention to the shape and beauty of the cabochon.” 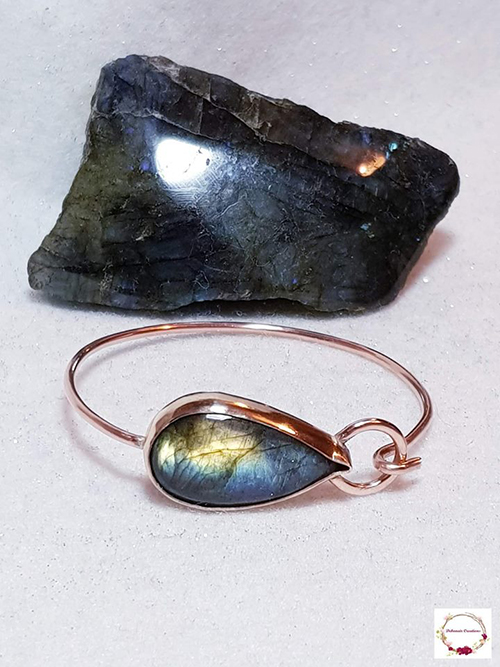 Sometimes the inspiration evolves while an artist is in the midst of creating, as Deb Briggs explains.

“My inspiration for this piece came from the Labradorite itself,” she said. “The Labradorite has this lovely copper-colored labradorescence going across it, as well as a bit of pink.

“I just knew that I had to use it with copper. The bangle wasn’t planned as such, it kind of happened as I made each piece.” 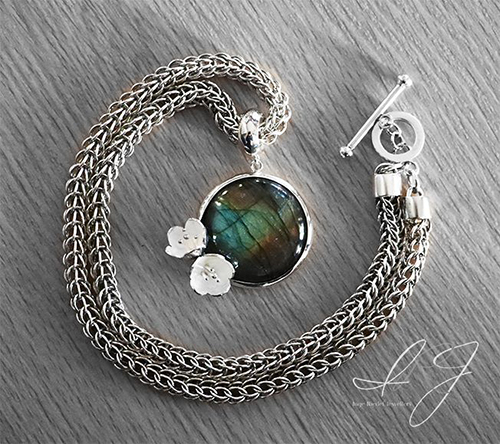 “This was one of those pieces for me that came together without much planning, definitely a case of inspiration happening more during the creation than beforehand,” states Inge Riedel. “I had some cute little bell-shaped flowers, from some previous experimentation with shapes, which struck me as a perfect accent to the vibrant labradorite, without overpowering the natural beauty of the stone.”

Continuing on, Riedel speaks about some of the steps in her creative process, saying, “After laying the flowers out and deciding their ideal positions, I felt the rest of the design needed clean lines, to highlight the stone and flowers.

“The foxtail chain was chosen, as I felt it would complete the pendant nicely, and add just the right amount of extra detail to the design.”

One joyful aspect of collaboration occurs when artists who have experience working with one another are able to readily see the other person’s vision for a piece.

“Rob and I work closely together on a lot of our projects, explains Jorgensen. “So whether it’s my pendant or his, as soon as we pick out the stone to work on I get busy finding the perfect beads to match.

“Over the years I have collected thousands of beads and take pride in matching my beads to the cabochon we are setting. I have never worked with dino bone cabs, so I was uncertain of the type of beads to use, but I found the perfect match.”

The uniqueness of the dinosaur bone was a significant quality artist Jeff Fulkerson looked to showcase.

“I had this beautiful chunk of gem quality dino bone and wanted to cut a shape that you don’t see every day that would challenge the artist and produce a piece that catches the eye,” Fulkerson adds.

For silversmith Rob Craig the piece was also about creating something that pays homage to the majestic creatures of the past.

“My primary inspiration for the making of this pendant was the beautiful agatized dinosaur bone cabochon cut and polished by lapidary artist, Jeff Fulkerson,” Craig explains. “When I saw it, I envisioned the awesome animal that left a small piece of itself behind after roaming the earth so many eons ago.

“I wanted to respect and appreciate the idea of the creatures that ‘reigned supreme’ during that time on Earth. I tried to do that by texturing the back to simulate scales that I imagined these beasts were covered with, adding a whimsical ‘wishbone-shaped’ bail, and including ‘Bones and Rocks’ on the front of the piece as the landscape might have appeared. I pierced the back with a representation of my favorite dinosaur, the Tyrannosaurus Rex.”

Be sure to look for new Artisan Alley showcase blogs/columns each week.

Gemstones and Glass Offer Best of Both Worlds