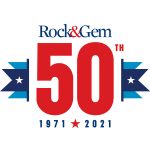 Rock & Gem: Discovery appears to be at the center or part of various careers you’ve enjoyed during your lifetime (photographer, marine salvage diver, hard rock miner, and science writer). Please describe how these careers contribute to your study of minerals, rocks, and geology.
Steve Voynick: Photography taught me to look at things objectively; in salvage diving, I learned to expect new discoveries every day. Hardrock mining was a lesson in looking at minerals from different perspectives, while science writing provided a way to organize and clarify all that I had discovered and continue to discover.

RG: What inspired your appreciation for minerals, rocks, and gems, and how long have you held this fascination?
SV: I was raised in a heavily industrialized section of New Jersey where the only mineral-collecting “locality” was the main line of the Pennsylvania Railroad, which was only a block from my home. The rail-bed ballast was diabase basalt from the northern New Jersey traprock quarries. It was laced with vugs filled with small but beautiful crystals of quartz, calcite, prehnite, and a half-dozen different zeolites. I began collecting “ballast specimens” when I was 12 years old and have been fascinated with minerals ever since.

RG: Who are three of your most significant mentors in life, and why?
SV: I’d begin with my college professors who made science understandable and enjoyable, and the many mine geologists who generously took the time to explain ore emplacement, mineral identification, and the geology of ore deposits. I’d also include Bob Jones, whose R&G articles served as excellent “go-to” examples when I began writing about minerals.

RG: Of the places you’ve been in the world, where do you feel drawn to return? And what is one place you’ve never been but long to visit?
SV: I’d like to revisit the mines, ruins, museums, colonial architecture, and people of Potosi, Bolivia, a place with a timeless quality that just exudes history. And among the many places I have never been to but would like to see, the diamond mines of northern Canada would be high on the list.

RG: Do you have a type of rock, mineral, or gem that is among your favorites, and what makes it so?
SV: From my mining experiences, I picked up a special interest in ores and ore minerals. Even though most ores are not visually impressive, I’m intrigued by their histories, economic significance, and the milling and smelting technologies that underlie their conversion to useful mineral commodities.

RG: Spending as much time as you have with rocks and making discoveries, what are two of the most important tips you can share about making the most of hunting for and studying rocks?
SV: My interest in minerals goes beyond crystal structure, color, and specimen value. I’m fascinated by the many ways that minerals have impacted every aspect of society from history and economics to art, culture, and technology. Learning about these impacts has been an ongoing education that has added another dimension to mineral collecting, enriched the overall collecting experience, and made each and every specimen mean something special. I’d encourage every mineral collector to look beyond the visual appeal of minerals and learn the history and stories behind them.

RG: What is your hope for the future of the rockhounding, mineralogy, and lapidary hobby and industry?
SV: My hope for the future is that more young people will become interested in mineralogy, geology, and paleontology, both professionally to advance the sciences and as amateurs to enrich and sustain the hobbies. Working toward this goal, I see that some clubs have outstanding youth programs, and I especially admire the work of R&G’s Jim Brace-Thompson.