I have a 40-pound rotary tumbler and two 12-pound rotary units running all the time in my shop. The focus of this on-going effort is to tumble and polish stones for use as part of the “wheels of fortune” attraction at the annual mineral show hosted by The Mother Lode Mineral Society, the club of which I am a member.

I’ll admit, I have a lazy man’s method for handling rock tumbling. I tumble for four to five weeks in 6o grit, followed by four weeks in the polish stage. I tumble slabs and general lapidary rocks for the prizes during our show. We have a rather large population of attendees, so we need quite a few stones for the wheels. As I am emptying the barrels, I always keep an eye out for unique pieces I can use to make cabs.

Recently, I came across a rather striking piece with an unusual pattern. The tumbling action exposed a repetition of small orange marks surrounded by a white border. The marks resemble Chinese writing, which, in my opinion, gave the finished piece an ancient oriental appearance. The rock was rather flat, measuring about four inches across. I know it is a variety of carnelian, but I do not recall when or where I came across the stone, nor do I recall placing it in the tumbler.

As I was visualizing the potential cab that may come from this piece, I had to inspect the slab closely to avoid the obvious fractures on the right and include as much of the pattern as possible. I slabbed it relatively thick at a little over one-quarter inch because I wanted to make the girdle blend over the sides without the pattern so that they would act as a frame around the pattern. Another feature in the pattern that I really liked was a vertical red line that appeared in almost the piece’s entire length. It also helped delineate the edge of the cab.

Although it is not very evident in the photo, some of the orange features have a dark vug in the center. This particular feature didn’t present a problem in fashioning the cabochon, but as expected, the polish did a good job filling the vug. I used my small ultrasonic cleaner to get the polish out, and it only took a few seconds to do it. To get the cleaner to do its best work, I always put the stones in the cleaner immediately after the polishing step, definitely not later after the polish has had time to dry out.

As you can see in the photos, the leftover trim piece was just as attractive as the finished cab. I was quite pleased with the cab’s look, and it came out better than I had expected.

Bob Rush has worked in lapidary since 1958 and metal work and jewelry since 1972.
He teaches at clubs and Modesto Junior College. Contact him at rocksbob@sbcglobal.net. 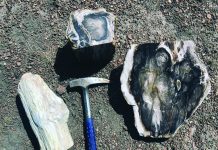 Earth Science In the News: Catching a Comet

What to Cut: Kirinite Acrylic