Editor's Note: Click here to read part one of this two-part series >>

Silverton, in southwest Colorado, is one of three major mountain towns surrounded by old gold and silver mines that became popular tourist towns after the mines shut down. In Part One of this series, I discussed 9,000 foot high Silverton at the terminus of the Durango-Silverton Narrow Gauge Railroad, the Old Mayflower Mill Museum, and the Old Hundred Underground Mine tour.

With the reopening of the American Tunnel-Sunnyside mine in the 1950s, the American Tunnel, Gladstone near Silverton, became a favorite of mineral collectors. The Tunnel extended through Gold King mine property and cut through mineralized quartz veins. This path produced huge quantities of pink to red rhodochrosite crystals on quartz, along with fluorite and other species. The bonanza of rhodochrosite continued until 1978 when Lake Emma burst into the mine and completely tore everything loose.

Before you leave Silverton, be sure to inquire about the Adams mine. It was a fine source of collector minerals briefly mentioned in Part I.  It is well known among serious mineral collectors as the place where a character of our hobby, much-admired collector/dealer Ed McDole one day dug huebnerite, the finest in Colorado. Ed died that same night in the Adams Hotel, Silverton, with flats of fine Adams mine huebnerite stacked next to his death bed. Ed, who is buried in Silverton, was so admired that a trophy was named in his honor. The winner of the trophy, presented during the Tucson show season in the past, had to drink a shot of Ed’s favorite rum. As the story goes, on the table in the room where he died sat a half-full bottle of his favorite rum. Where is that half-filled bottle of rum today? Why it’s an artifact in the Jones mineral collection.

Back to Silverton, from the city’s center, you drive the Million Dollar Highway to Ouray, the northern doorway to the San Juans. The highway earned its name because silver and gold mine dump rock was used on the original road. This road is a bit scary to navigate during the summer, due to steep drop-offs. Plus, it’s even more of a challenge in the winter as it clings to the mountainside. Avalanches are common in the area and can wipe out a single road sending vehicles and even heavy snowplows into the creek far below. More than one snowplow driver met his demise here.

On your way to Ouray over Red Mountain Pass, you see some of Colorado’s most beautiful scenery. These views have given the San Juans the name “Switzerland of America.” From the pass, you can see Colorado’s most colorful mountains, the three Red Mountains. These richly colored, more than 12,000 foot high peaks are so highly mineralized that weathering has turned the slopes into a riot of reds and oranges, which is a sure sign to prospectors that gold and silver are present.

On the drive over Red Mountain Pass, you’ll proceed by one of those rich gold mines, The Camp Bird Mine, discovered by Thomas Walsh in 1896. The mine produced millions in gold, silver, copper, lead, zinc, and various species before it closed a couple of decades ago. The Camp Bird Mine was so rich miners followed a vein entirely through the mountain. Called the Treasure Tunnel on the Ouray side, the same tunnel exited high above the town of Telluride, the third most important city of the San Juan Mountains.

Camp Bird’s discoverer, Walsh, may sound familiar, because his daughter, Evalyn Walsh McLean became famous as the owner of the coveted Hope Diamond. Stories abound about the Hope Diamond, which resides in the Smithsonian’s Gem Hall. For example, did McLean actually put the Hope diamond in her dog’s collar? Did she indeed hide the gem when guests attended a party at her home, so the diamond served as the focus of a treasure hunt? The diamond most certainly wasn’t the prize gifted to the winner, but what a unique experience nonetheless.

While a lot of information is available about the Hope Diamond, something that’s not widely known is that it accidentally fell to the floor of the Smithsonian. That little episode involved a couple of rockhound friends. Again, as the story goes, the diamond was gifted to the Smithsonian by Harry Winston, where it remains on display in perpetuity. The only time it is moved is for special occasions and cleaning.

Once I asked my friend, Paul Desautels, who was the curator for the Division of Mineralogy at the Smithsonian, if we could display the Hope Diamond at the Tucson Gem and Mineral Show . While the answer to that question was no, he did share a story with me that few people heard. As Paul was in the process of cleaning the diamond, he took it to a room where a vault exists for keeping major valuables. Accompanying Desautels was Dave Wilber, who, among other things, co-hosts the “What’s Hot in Tucson” videos with me while we attend the Tucson show. While cleaning the diamond, Desautels weighed the stone, which weighed just over 45 carats, and somehow in the process of transferring the diamond between themselves, the Hope Diamond slipped, hit the floor, and then bounced. Not surprising, Desautels recalled his life passing before his eyes as the stone was falling, but fortunately for all, the floor was carpeted, and the diamond remained intact.

While I do enjoy discussing the Hope Diamond, another topic I find interesting is Ouray, Colorado. Upon arriving in Ouray, a great place to begin is the Ouray County Historical Museum. There you will see selections from John Marshall’s very fine Colorado mineral collection, minerals from Becky Bird’s collection, and artifacts and information depicting San Juan’s mining and local history. John Marshall hailed from New England and was very involved in mineral collecting and mining. He was a partner in Maine’s Plumbago prospect, and during his travels across the U.S., he fell in love with Ouray, Colorado. His fascination with the San Juan Mountains is obvious, simply by studying his collection.

As I mentioned earlier, the museum in Ouray also feature specimens from the collection of Becky Bird. She was a diligent collector and enjoyed rockhounding well into her 90s. You probably haven’t heard of Becky Bird, but she was my kind of collector. I met Becky in Ouray years before she moved to Tucson, and at the time she was in her late eighties and regularly could be found in dig sites within Colorado and Arizona. While her rockhounding passion and prowess were impressive, that is one aspect of a memorable and accomplished person.

Becky and her family spent summers living on a houseboat traversing the Nile River. Through an invite from her friend, Howard Carter, she visited King Tutankhamun (King Tut’s) tomb, becoming the first woman to do so. She was also a talented snow skier and a member of the Women’s Demonstration Ski Team of the 1920s. The team that convinced the Olympic Committee to make women’s skiing a medal sport.

Among her friends and family by marriage was aviation pioneer Amelia Earhart, who was married to Becky’s cousin. Another of her passions was creating art, at which she also excelled. Once, in the 1930s, she received an invitation to travel to Germany to fulfill a request that she paint a portrait of Adolph Hilter. As the story goes, upon her arrival at the Reichtag, painting equipment in hand, she was met by Joseph Goebels, who was to escort her into see Hitler. Goebels informed Becky she had to remove all of her makeup before meeting Hitler, to which she responded by telling him off and making haste for the door. As I’m sure you can understand, that’s the kind of rockhound I enjoyed knowing.

As you can see, Ouray has a unique history and an equally intriguing present. Another of Ouray’s popular present-day destinations is the Columbine Mineral Shop. Owner Benjie Kuehling, who has been in business for more than 50 years, knows every mine dump, outcrop, and mine in the San Juan's. 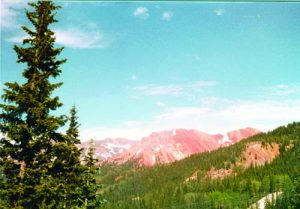 country to see the dumps and amazing natural scenery, one option is to rent a four-wheel-drive vehicle in Ouray. Of the several passes that run into and over the mountains out of Ouray and Silverton, Imogene Pass is certainly the most scenic, in my opinion. The scariest is Black Bear Pass. If you want to travel Black Bear Pass, I’d recommend you hire a driver/guide and vehicle. Several companies in Ouray provide this service, and the view you’ll gain by traveling to the west side of the mountain is breathtaking.

As for Imogene Pass, it begins in Ouray and runs past The Camp Bird Mine. The pass is over 13,000 feet up, but it is not a difficult drive. It extends just over 17 miles from Ouray to Telluride. From the Ouray side just before you top out on the pass, I suggest you look for and pull into the parking area on the left. The view looking back toward Ouray is fantastic, the most scenic and colorful mountain view in this country, in my opinion.

Once over the pass, you head down to Telluride. The first time I visited Telluride, in 1957, the place seemed almost deserted, with empty houses, closed stores, and a quiet small population. At the time, my family and I even inquired about property in the area. We learned we could buy a small house for between $5,000 and $8,000. Not anymore!

High above Telluride is the Idarado mine, known for its lovely quartz crystals. Long since closed and reclaimed, I always enjoyed driving by the old tailings pond where beavers had taken up residence. When it was in operation, the Idarado was abundant in several metals, including gold and silver.

Although we’ve covered a lot in this two-part series, it’s just a glimpse into the phenomenal San Juan Mountain region. It’s definitely worth your time and attention. While this summer may not allow you the opportunity to travel, perhaps sometime in the future, you too can enjoy part of summer in the San Juans.

Moroccan Aragonite: Specimens by the Millions