Smithsonite, or zinc carbonate, is a favorite among mineral collectors for its range of pleasing colors and often well-developed, botryoidal crystal habit. Most collectors agree that smithsonite’s most striking color is the saturated, robin’s-egg blue of the lustrous, translucent specimens from Magdalena, New Mexico. 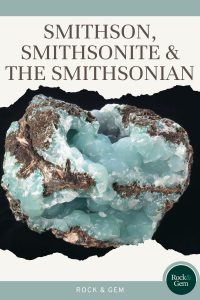 Smithsonite is also interesting for its unusual historical connection, which is rooted in “calamine,” a mineral that scientists initially believed to be zinc oxide. But in 1803, English chemist James Smithson demonstrated that calamine was actually a mix of three zinc minerals—an oxide, a carbonate, and a silicate. Smithson’s success in chemically differentiating oxide and carbonate minerals was a major advancement in qualitative mineralogy. In 1832, calamine’s zinc-carbonate component was formally named “smithsonite” in his honor. But Smithson’s legacy was destined to go much further.

James Smithson was born in France in 1765 as James Lewis Macie, the illegitimate and unacknowledged son of British subject Hugh Smithson, the first Duke of Northumberland. Smithson eventually adopted his father’s name, became a naturalized British citizen, and in 1786 earned a degree in chemistry from Pembroke College (University of Oxford).

Smithson’s intense interest in mineralogy led him to devote much of his attention to the qualitative analysis of minerals. Among his many significant mineralogical papers is A Chemical Analysis of Some Calamines, which describes the mineral that would later be named for him.

Smithson inherited a sizeable estate from his mother and increased its value substantially through shrewd investing. When he died in Italy in 1829 (and was buried in Genoa), Smithson left most of his estate to his nephew Henry James Hungerford—with the contingency that should his nephew die without heirs the estate would instead go to “the United States of America, to found at Washington, under the name of the Smithsonian Institution, an establishment for the increase and diffusion of knowledge.” 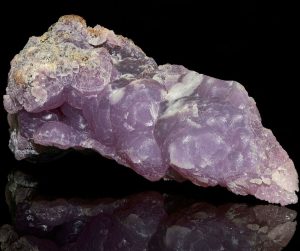 When Hungerford died in 1836 with no heirs, the United States Congress accepted Smithson’s bequest—104,960 English gold sovereigns, which arrived two years later at the United States Mint at Philadelphia. These were melted down and minted into U.S. coinage worth $508,318. Valued at roughly $15 million today, this was the seed money for the establishment of the Smithsonian Institution.

Congress founded the Smithsonian Institution in 1846 as the National Museum of the United States. In 1904, telephone inventor Alexander Graham Bell, then a Smithsonian regent, brought Smithson’s remains from Genoa to Washington, D.C., to be reinterred in the Smithsonian’s original “Castle” building.

The Reasons for Funding

The motivation for Smithson’s bequest to the United States, which he had never visited, remains uncertain. Historians cite three possibilities. One was a desire to found an institution that would outshine his aristocratic father’s legacy. Another was his displeasure with the failure of the English social system to acknowledge him as the son of a duke. Finally, Smithson, who had lived in Paris during the French Revolution, may have admired the United States’ revolutionary spirit and believed his gift would have greater impact on a young nation that, unlike the nations of Europe, had few major research and educational institutions.

Whatever Smithson’s motivation, his bequest had huge consequences. Today, the Smithsonian Institution is the world’s largest museum complex. It consists of 16 individual museums and the National Zoo, along with several research centers. Given his interest in minerals, Smithson would be especially proud of the Smithsonian’s National Museum of Natural History, where the original mineral gallery was replaced in 1997 by the Janet Annenberg Hooker Hall of Geology, Gems and Minerals. This $18-million, 20,000-square-foot hall displays 2,450 mineral specimens representing 600 species. Among these specimens are 548 gems, including the 45.5-carat Hope Diamond, the world’s largest, deep-blue diamond.

Smithson would also be pleased by the Smithsonian’s display of two superb smithsonites, one from Tsumeb, Namibia, and the other a spectacular botryoidal, robin’s-egg-blue specimen from Magdalena, New Mexico.

Exploring the Big Thunder Gold Mine