If you were to ascribe a motto to the interest of rockhounding, lapidary, and the like, what phrase would you select?

Asking that question of Erik Rintamaki of Yooperlite fame, one could expect a few responses, but carpe diem (loosely translated as “seize the day”) seems to be the perfect phrase, whether he’s taking on a wildly unexpected Yooperlite and agate hunting excursion in January along the shores of Lake Superior, spending time tapping into all of his skills (natural and hard-fought) to better his YouTube channel and social media presence, or always striving to be present and never take any of the opportunities for granted.

To recap, Rintamaki has been hunting Yooperlites (a name he coined) since he discovered the glowing beauties along the shores of Lake Superior in Michigan’s Upper Peninsula in 2017. What he discovered was a unique formation of a fairly common element, fluorescing sodalite. The discovery of this unique find by a self-proclaimed “joe schmo rockhound” attracted the attention of geologists, mineralogists, rockhounds, educators, news media, and people who simply found the glowing rocks to be fascinating. So several people on the planet have, let’s say, become fans of the glowing rocks.

Since his discovery and naming of the glowing rocks, Rintamaki has been a happily busy person. Before we go any further, let’s talk names. “Yooper” is the abated abbreviation of “U.P.” for Michigan’s Upper Peninsula — “Yoopers” are the area’s colloquial citizenry, as explained in an article by Wayne Peterson, published in the March 2019 issue of Rock & Gem. “Lite” refers to the rock’s fluorescent properties from sodalite. Together, it forms Yooperlites.

We caught up with Rintamaki recently to mine his experience and intellect for tips and hints about how he has made the most of the opportunities presented. At a time when the world continues to deal with the results and impact of COVID-19, there has been a mix of outcomes for businesses and individuals within the rockhounding and lapidary community. Some have flourished with online sales and on-site dig excursions, while many others have experienced lost income, lack of connection to others, and lost opportunity. Hopefully, some of the insight provided by the man who started the Yooperlite craze will inspire and bring a sense of hope.

“I take this very, very, very seriously, because I’ve now become like a folk hero for the rockhounding community,” said Rintamaki, who began collecting rocks before he could steadily walk the beaches of Lake Superior. “Because I’m just an average joe schmo. I’m not a geologist, I’m not a scientist, and I’m not a doctor, but I found something and did something any average rockhounder can do.”

BASING A BUSINESS ON A PASSION

Growing up in the Upper Peninsula, he still has the very first rock he collected. His mother, Penny Nantell, recorded the info on the rock, which he found while hunting with his dad.

“Every spring, as soon as there were little pockets of rock where the ice had melted on the beach, our dad (Ray Rintamaki) was having us out there with him – we’d be climbing rocks and also looking for rocks with him,” said the younger Rintamaki, whose grandfather Vilio Rintamaki, was also a rockhound and a jewelry artist who owned Mac’s Jewelry in Newberry, Michigan, and imparted his love of rocks to his son, Ray.

One of the many things that 2020 reiterated for Rintamaki is the truth and importance of expecting the unexpected. Instead of attending 30 shows, as he had planned, he attended one – the Tucson Gem and Mineral Show. However, his tour spots filled up in 2020. He offered just under 40 dates, between July and October, which he conducts himself, and they were full. With his 2021 tour dates posted (things get started July 7), now is the time to reserve a space.

PREPARING FOR THE UNEXPECTED

Having his online business in place and a well-defined system made a difference for this “one-man-band,” who does have help from his wife, Angela, when it came to selling Yooperlites and gear, and fulfilling orders, he said.

Sales at his store, www.yooperlites.com, jumped from $100 to $2,000 per day after news of the COVID-19 pandemic spread. Having a website that was well organized and one he was familiar with operating has made a significant difference, he added, explaining that January 2021 saw his site generate three times the sales of January during other years. Plus, having inventory on hand is what makes much of that possible.

Hunting Tip: Be sure you know the localities you are hunting and whether they are public or private property. Also, make sure you’ve researched the laws mandating what and how much of the geological material you find you can keep. For example, in Michigan there is something called the 25-pound rule. This means you can keep 25 pounds of rocks per person, per year, that are found on state property. Each state and even region is different, but doing research up front is critical and respectful, Rintamaki advises. 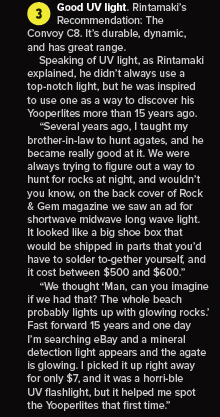 Remember the tip about expecting the unexpected? Another great example of that is the fact that Rintamaki has spent at least a couple of early morning hours (between midnight and dawn) on the shores of Lake Superior hunting rocks in January of this year.

“There’s no such thing as winter Yooperlite hunting.” said Rintamaki. “Normally, that is. However, 2021 winter is the weirdest winter ever. Right now, we have 12 inches of snow, and normally we have six feet of snow.

“It’s the strangest winter I have ever seen. I was at the beach twice in January and found stones on the 5th and the 12th. Never have I done that.”

He’s also invested more time and effort in developing videos for his YouTube channel and sharing his adventures and opportunities via social media, he said. Again, as a one-man-band, he handles the videography, voiceovers, music, and editing of his videos. With a degree in musicianship from the now-defunct McNally Smith College of Music in Minnesota, Rintamaki, who used to travel and play music for a living, is able to incorporate his musical chops into videos showcasing another of his loves, Yooperlites. In 2020, he had just over 1,000 subscribers to his channel, and as of the first week of February 2021, he crossed the 10,000-subscriber mark, which also places him in the arena of being able to monetize his efforts.

While the adventures, excursions, and opportunities are a mix of predictable and wildly unexpected, Rintamaki wouldn’t have it any other way and strives to make certain that all of these things contribute to his main purpose, “hooking the next generation on rockhounding.”