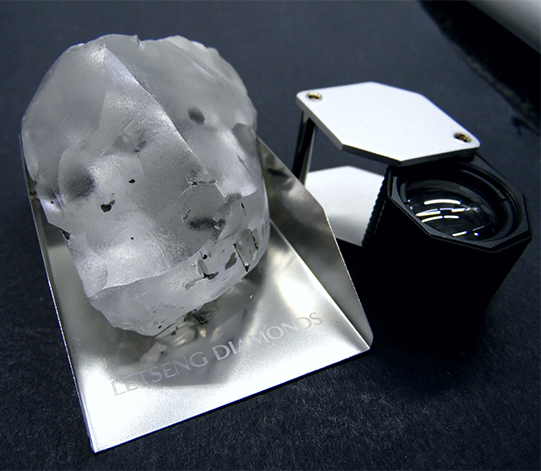 Super-large diamonds — stones of several hundred carats or more — command fabulous prices. Because of their great rarity, numerous cutting options, and prestige of ownership, their values increase exponentially with size.

Super-large diamonds have been making big headlines. That’s because mines in southern Africa are yielding some of the biggest diamonds ever found. In January 2018, London-based Gem Diamonds, Ltd., announced the recovery of a 910-carat diamond at its Letšeng mine, in the nation of Lesotho. According to gem experts, this tennis ball-size stone, the fifth-largest diamond on record, will sell for a whopping $40 million, or nearly $44,000 per carat.

But super-large diamonds may not be quite as rare as previously thought. In just the last two years, the Letšeng mine has also yielded stones weighing 603 and 530 carats, along with four other stones weighing 300 carats or more.

Another source of super-large diamonds is Botswana’s Karowe mine. In 2015, Karowe’s owner, Lucara Diamond Corp., based in Vancouver, Canada, announced the recovery of a 1,110-carat diamond measuring 2.6 in. x 2.3 in. x 1.8 in.—the world’s second-largest diamond. Since then, Karowe has also yielded stones of 812 and 374 carats.

More super-large diamonds have been mined in the past 10 years than throughout history. They come from African mines that are using state-of-the-art, diamond-detection systems.

Diamonds form in Earth’s mantle at depths of about 200 miles and in conditions of extreme temperature and pressure. Some are carried to the surface in columns of kimberlitic magma that solidify as narrow, vertical, kimberlite pipes. Only 1% of these pipes are diamondiferous, and only a few of these are rich enough to mine. Kimberlite ores containing 1 carat of diamond per ton are considered high-grade.

The ore at the Karowe mine, which has produced more than half the world’s diamonds weighing more than 100 carats, grades only 0.16 carat per ton. But Karowe’s relatively few diamonds tend to be unusually large. While rough diamonds of less than 1 carat sell for as little as $20 per carat, Karowe’s 1,110-carat diamond, yet to be sold, could bring $70 million, or $63,000 per carat.

Most of southern Africa’s kimberlite mines are huge, mechanized open pits, where ore is drilled, blasted, crushed to 6 inches in size, and fine-crushed to 1 inch. The crushed ore is concentrated in a dense media separation (DMS) process (diamond is denser than most other kimberlite components). X-ray beams then cause the diamonds to fluoresce, enabling light-sensitive separating devices to “kick” the fluorescing diamonds from the conveyor streams of crushed ore.

But it now appears that certain African mines that are proven sources of big stones have unknowingly been losing super-large diamonds. And the loss of just one giant stone represents tens of millions of dollars in lost earnings.

To prevent this loss, mines have installed powerful X-ray units to scan kimberlite ore before the first crushing step. X-rays can reveal density differentials that may indicate the presence of large diamonds, even those completely hidden within chunks of kimberlite.

These industrial X-ray units and the computers needed to instantly interpret their scanning data are not cheap, but as the rapidly growing numbers of super-large diamond recoveries indicate, they are worth every penny.

The theory that the rarity of super-large diamonds may have been overestimated is focusing attention on the legendary Cullinan diamond. The 3,106-carat Cullinan, mined in 1905 at South Africa’s Premier mine, is still the largest diamond ever found. It was cut into nine major stones—the 530-carat Star of Africa, the 317-carat Second Star of Africa, and seven other large gems—and 96 “minor brilliants”.

Noting the sharp increase in recoveries of super-large diamonds, some experts suggest that in the not-distant future, the legendary Cullinan just might become the world’s second-largest diamond.

This story about digging for amethyst stones appeared in a previous issue of Rock & Gem magazine. Click here to subscribe! Story and photos by Steve Voynick.