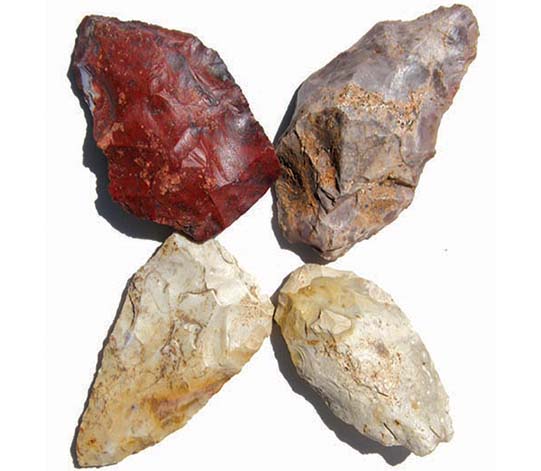 As a boy spending summers on Grandpa’s Illinois farm, I found artifacts within fields of soy beans and corn. Artifacts are man-made objects that often had a practical purpose, such as pottery, weapons, or everyday tools. The artifacts I found were arrowheads. Much later, after a move to California, I found what seemed to be crude artifacts on the hardscrabble floor of the Mojave Desert, but there were so many of them.

Did Native Americans use the Mojave as a dumping ground for all their reject arrowheads?

As it turned out, what I saw in the desert weren’t artifacts but geofacts: natural rocks that resemble things crafted by people. They may be rocks that appear to have holes drilled into them, hollow concretions that look like bowls, or—in the case of what I was finding—pieces of jasper that looked like they had been knapped by human hands. But the only hands that touched these were my own.

The chipped edges were made by natural forces as stones tumbled and smacked against other stones, perhaps in a flash flood. In some instances, a rock not native to one area was moved from another area and dinged along the way by glaciers. Or stones can chip from pressure if buried beneath other stones.

Geofacts can lead to arguments among anthropologists. For instance, chipped stones have been found at Calico Early Man Site in California. Some consider these to be artifacts. However, they tend to be crude and some are found in beds dated at 100,000 to 200,000 years old. Other scientists insist that age is far too old and that no humans had populated the Americas at that time. They consider these chipped stones to be geofacts.

Who’s right? Here’s your invitation to become an anthropologist and join the debate!