We realize not everything in geology and mineralogy is sparkly, but this specimen certainly adds another level to the sparkly side of the Mineral of the Week.

The marcasite on calcite Mineral of the Week specimen is on offer by Joe and Michelle Weisberg and open for bids at www.mineral-auctions.com.

This specimen features a sparkly gold- to copper-colored coating of marcasite on bladed calcite crystals. It was discovered in Brushy Creek in Reynolds County, Missouri, and it weighs 20 grams. 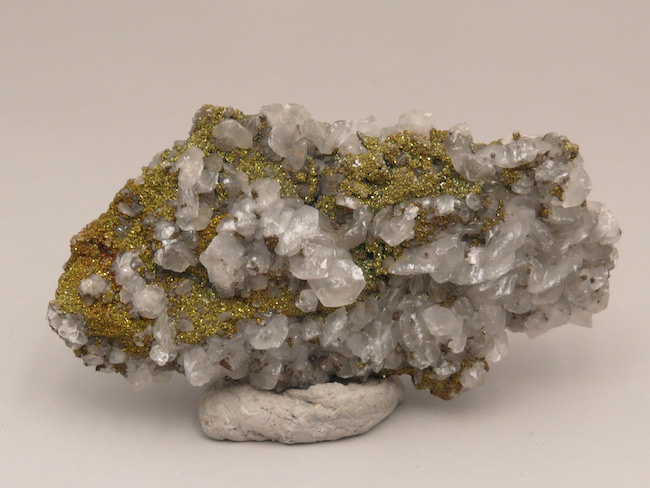 Marcasite has been referenced in mineralogy since before mineralogy was a formal study. As reported at mindat.org, the word marcasite was used in reference to metallic bronze-colored minerals in the 16th and 17th centuries. The word’s origins are Arabic in nature.

It appears the earliest formal mention of marcasite in writing came about in 1665, courtesy of Dr. Walter Pope while describing mercury ores discovered in the Idria Mine, in the Julian Alps of Slovenia. Fast forward to 1845, and it was the use of the name marcasite by Wilhelm Karl von Haidinger that led to the formal definition of the mineral as it is known today, as explained at mindat.org.

As the pictures reveal, marcasite is often known to present in various shimmering colors, such as yellow to silver and yellow to yellow-bronze. As explained in the book The Mineral Marcasite, edited by Hershel Friedman, the mineral most often appears as an orthorhombic crystal form, and the shapes are bi-pyramidal shaped. Another form marcasite is known to take, as is the case with this specimen, is to encrust another rock or mineral.

In addition to the Missouri locality of this specimen, marcasite is reportedly found in a number of states, including Maine, Rhode Island, Pennsylvania, Virginia, North Carolina, Florida, Washington, Nevada, Oregon, and California, as reported by www.jewelrynotes.com.

In addition, the other mineral present in this specimen is the well-known all-around mineral calcite. According to information at www.minerals.net, calcite — a member of the calcite group — crystallizes in the trigonal system, is known to have perfect rhombohedral cleavage, and exhibits strong double refraction. While calcite is known to present in various colors, including yellow, brown, orange, pink, purple, blue, green, black, and gray, among the most prevalent colors are colorless and white, such as the examples present in the featured specimen. Calcite also presents in various colors, but it is found in various shapes, including scalenohedral, acicular, tabular, prismatic, and most often, rhombohedral. In terms of hardness, calcite is on the softer side of the Mohs scale at a 3, compared to marcasite at 6.

Separately, these two minerals possess exciting aspects, and when combined, as this Mineral of the Week clearly shows, they form a unique and sparkling specimen.