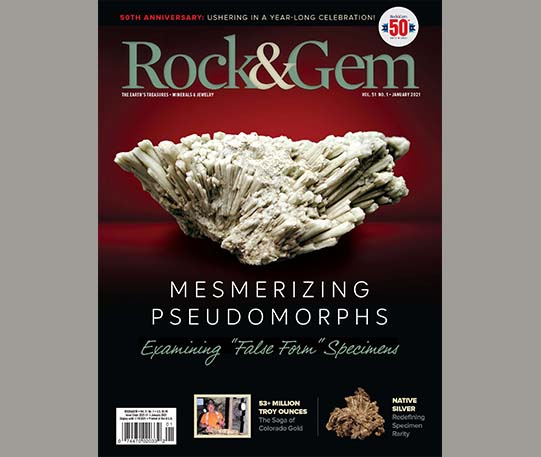 Below is a snapshot of some of the topics and interests you can expect to see in the pages of the January 2021 issue of Rock & Gem. Plus, we've included some sample pages for you to enjoy.

• THE SAGA OF COLORADO GOLD: 53 Million Troy Ounces and Counting. By Steve Voynick

• IN THE STUDIO: NANCY ARTHUR-MCGEHEE: Master Glass and Gem Engraver. By Helen Serras-Herman

• DIGGING IN AND MAKING DISCOVERIES ON HART MOUNTAIN: Expanding on a Hypotheses About Amygdale Pseudomorphs. By Steve Ewens

• SPENDING TIME AT KINGMAN MINE: Enthralled by Turquoise and a Rich Family History of Mining. By Bruce McKay

• EVOLUTION OF A GEMSTONE BUSINESS: New Era Gems — Carving a Path and Creating a Legacy. By Antoinette Rahn

In addition, you'll find the following regular R&G columns: Bench Tips with Bob Rush, Rock Science with Steve Voynick, What to Cut with Russ Kaniuth, On the Rocks with Bob Jones, Rock & Gem Kids and Earth Science In the News with Jim Brace-Thompson, Sneak Peek: Opals, The Road Report with Helen Serras-Herman, Show Dates, and the always popular Parting Shot.