The word dolomite had two meanings, one as a fine collectible crystal and two as a huge rock formation that can be thousands of feet thick in the earth's crust such as the Dolomite mountains in Europe. Today, the rule of thumb is if it is a rock it is dolostone, and if it’s a crystal it’s dolomite.

Why One Name for Two Things? 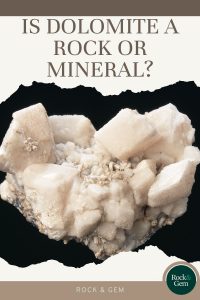 That made things even more confusing, and the confusion persisted until 1948 when geologists decided to clarify matters. Minerals that are calcium magnesium carbonate should continue to be called dolomite. The large limestone rock formations, previously called dolomite, should have a new name, dolostone, or magnesian limestone. Calcium carbonate limestone is just limestone.

Dolostone is a major sedimentary rock formation in the earth’s crust and joins with other sedimentary formations like shale, sandstone, and limestone. During the same time as the adoption of the name dolostone, the process of fracking came into vogue.

Fracking had been a process known for many decades. Deep-seated sedimentary formations can release oil and gas when shattered. The organic material released by fracking is what remains of the very early life forms that existed in muds and sands. Not all sedimentary formations contain such valuable ingredients, but when found in quantity among shale, sandstone, limestone, and dolostone, fracking can be employed.

When collecting quartz crystals around Herkimer, New York, rock hounds will see evidence of ancient organic material as small black inclusions locked in some of the quartz crystals, and in the pocket itself. What is the rock they have to bash and pry loose to find those quartz crystal pockets? Dolostone.

Herkimer dolostone started out as a limey mud millions and millions of years ago. The mud, mainly carbonate dioxide, was invaded by magnesium-rich waters resulting in calcium-magnesium limestone. But that’s not the whole story. As the mud was accumulating, so was a new and unique form of bacteria called cyanobacteria, which was growing the mud.

What made cyanobacteria unique was it could absorb carbon dioxide, a dominant gas in the ancient atmosphere, and produce its own food while releasing oxygen as a waste product. Cyanobacteria were the earliest first life form on earth to use photosynthesis, which had a profound impact by changing life on earth. All this was going on while the limey magnesium-rich mud was altering to calcium magnesium carbonate rock we call dolostone.

As the mud continued to pile up, the cyanobacteria would cultivate in large clusters, or colonies, called stromatolites. It would then gradually die off and new colonies would develop. The dead colonies would be buried creating gaps, or open spaces, in the newly forming dolostone. The organic residue of these dead stromatolite colonies remained in the cavities they created.

Today, as you work the Herkimer area, dolostone is a real challenge because of its hardness. You are looking for the open pockets created by those dead stromatolites. Later, watery solutions containing silica gradually seep through the dolostone and join any silica already in the mud. It slowly develops the lovely quartz crystals we collect. During crystal growth, the quartz would also pick up bits of the cyanobacteria organic residue, and is seen as black organic material we have named anthraxolite, in Herkimer’s quartz crystals.

As interesting as dolostone is, especially when it produces nice crystals, the dolomite we are most interested in is not a huge rock formation, but lovely crystallized specimens that are found in Spain, China, Brazil, and several U.S. localities. Crystallized dolomite is found as an accessory mineral in many ore deposits, and as a common mineral in some hydrothermal deposits as discrete crystals, and excellent collector specimens.

Dolomite, as noted, is a calcium magnesium carbonate so it is relatively soft, just a bit harder than calcite. It develops in the trigonal rhombohedral crystal system and, like calcite, will cleave in any one of three directions. While acids will attack calcite vigorously, dolomite reacts less vigorously. One of the odd features of some dolomite is its tendency to form what are called saddle-shaped curving crystals. These tend to be small. ,

Dolomite’s color tends to be colorless, white, creamy, and an uncommon pink. China yields unusual, orange-colored dolomite, but it is rare. Dolomite forms a complete series with ankerite and kutnohorite, both of which are iron, calcium, magnesium, and manganese carbonates.

For years, the finest dolomite crystals were harvested in quarries around Eugui, Esterbar, Spain. The dolomite from there occurs in large, sharp, water-clear rhombic crystals often in interlocking clusters of crystals sometimes showing penetration twinning. The crystals can be exceptionally large for the mineral, as much as two inches on an edge. The rhombic faces often show small growth patterns that are quite interesting. Though these dolomites are still considered among the world’s finest such dolomite specimens, they are now rivaled by crystals from China and Brumado, Brazil.

Here in the States, collectors are most familiar with the small creamy dolomite crystals found as an associated mineral with galena, calcite, sphalerite, and chalcopyrite from the Tri-State area of Oklahoma, Missouri, and Kansas. When these lead mines operated, specimens were so abundant they were almost ignored because they were so common. Local retired miners collected quantities of specimens that they offered for sale in stores, roadside stands and in front yards. The dolomite crystals were never large, usually under a half-inch, but sharp, slightly curved and a light cream color. They played a subordinate role to the larger crystals of galena, fluorite, and even calcite from these mines.

China has really stirred things in the mineral collecting world since opening its borders a few decades ago. As for dolomite, China has two major sources for this lovely mineral. From the mercury complex mines of Wanshan, Tongren, China, the dolomite is found in white opaque, lustrous, and sometimes transparent, colorless crystals. The dolomite occurs abundantly, but generally only as an associated mineral to the more important ore mineral bright red cinnabar crystals.

China’s other important source of dolomite crystals has been the Shangbao Pyrite mine, Hunan Province associated with pyrite crystals. The pyrites from here are lustrous and can be quite large, well over an inch or two on an edge. More importantly here, are the dolomite crystals found with other species. They are large rhombic crystals that occur with calcite, some quartz, and fluorite; and the better specimens are with dolomite the dominant species.

More interestingly are the dolomite crystals found that are sharp and exhibit dolomite’s unusual curving saddle-shaped crystals far larger than any we have seen from the U.S. These larger saddle-shaped clusters reach almost three inches across. Their faces are sharply steeped in a series of rising crystal edges.

Another surprise from this locality is the dolomite crystals that are richly colored by iron, so they have a good yellow-orange color. The crystals are under a half-inch, but in a nice radiating cluster on which quartz or calcite has developed.

While dolomite, usually lacking a really vibrant color, is not among the more popular exhibit minerals, it does occur in fine crystal groups. As an important companion to many showier species, it also plays an important role.