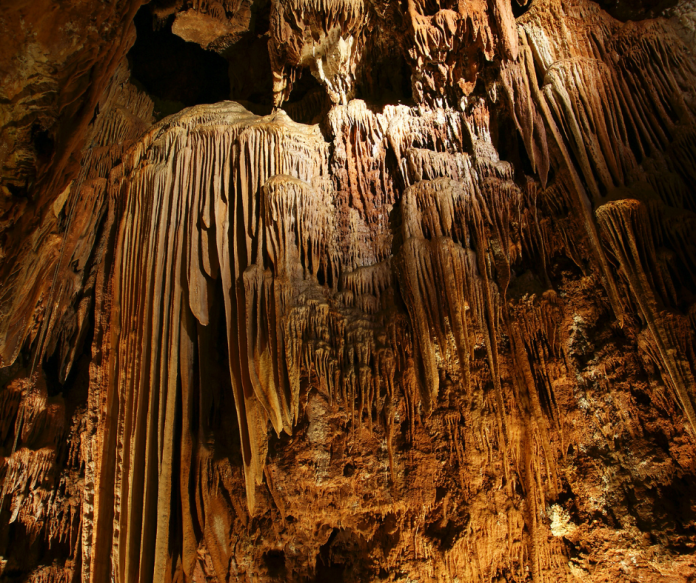 How stalactites and stalagmites form is one of the most common questions asked by visitors to the National Park Service’s limestone caves. The answer is found in a bit of basic but fascinating chemistry.

Stalactites and stalagmites form when surface water dissolves carbon dioxide from the atmosphere or soil to form carbonic acid. Percolating downward through limestone strata, this weak acid dissolves small amounts of calcium carbonate. When it reaches a cavern roof and contacts cavern air, this acid begins to lose its dissolved carbon dioxide just like a newly opened can of soda.

This loss of carbon dioxide decreases acidity causing the dissolved calcium carbonate to precipitate out of the solution. As water drips from cavern ceilings, this precipitation of calcium carbonate forms stalactites, which hang from cave ceilings like icicles. At the drip point directly beneath the growing stalactites, the same process causes stalagmites to build upward from the cave floor.

Thanks to a new ability to “read” these growth rings, stalactites and stalagmites are revealing their ages and providing additional insight into the geological and climatic conditions that existed at the time they formed.

Because of variations in seasonal and drought cycles that control the abundance of surface water, growth rates are often uneven and erratic. Maximum growth occurs during peak availability of surface water in rainy seasons, periods of snowmelt or wet climatic cycles. But when water is in short supply or unavailable, growth rings may not develop at all.

Because of their faster growth rates, stalagmitic growth rings are thicker and more distinct than those of stalactites and have a greater scientific value. When water drips onto a stalagmite, the impact instantly “degasses” the water, sharply reducing acidity, accelerating the precipitation of calcium carbonate and creating large, well-defined growth rings. In the past, scientists visually counted annual growth rings to roughly estimate the age of stalactites and stalagmites. But researchers now employ a far more accurate radiometric dating technique.

Uranium, which has a chemical affinity for calcium, is present in trace amounts in virtually all rocks, including stalactites and stalagmites. Being radioactive, uranium disintegrates continuously into an orderly “decay chain” of elements and isotopes, one of which is thorium. Unlike uranium compounds, those of thorium are not water-soluble. The thorium in stalactites and stalagmites therefore formed after calcium carbonate was deposited. Measuring the relative amounts of thorium and uranium present in growth rings can thus reveal the age of stalactites, stalagmites, and entire cave systems such as Carlsbad Caverns — even caves that are millions of years old—to an accuracy of just a few hundred years.

So, while the question of how stalactites and stalagmites form has a simple chemical answer, there is much more than meets the eye to these beautiful cave formations.

This story about how stalactites and stalagmites form in caves previously appeared in Rock & Gem magazine. Click here to subscribe! Story by Steve Voynick.

Malachite — Part II: Banded Beauty Comes from Russia and the...

Footprints in the Sands of Time Are Disappearing