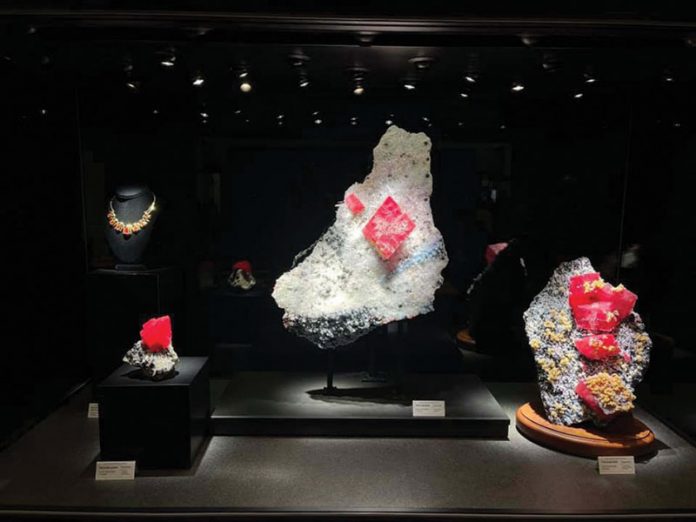 How is rhodochrosite mined? The search for the world’s finest rhombic rhodochrosite specimens started in the 1970s when a specimen, later called the Alma Queen, had been dug by a rock hound and ended up being displayed in Tucson. This specimen caused renewed interest in its source, the Sweet Home mine, near Alma, Colorado.

The three specimens considered by most as the world’s finest rhombic rhodochrosite specimens were displayed at the Rock Summit Show in Denver in 2020. The exhibit was labeled “Rhodochrosite Royalty.” Each specimen has a story to tell…

How is Rhodochrosite Mined - the Alma Queen

The smaller Alma Queen was collected in the 1960s by a rockhound miner who sold it at a show in Los Vegas. The specimen was sold and passed through several hands until it was obtained by noted collector/dealer, David Wilber.

I saw this smaller Alma Queen at a Tucson Show in the 1970s where Dave had it on display. At the time, it was known as “Wilber’s rhodochrosite.”

Colorado collectors had not seen anything like this specimen from the Sweet Home mine and some of them made a serious specimen mining effort at the Sweet Home but were only marginally successful.

I had collected in the Sweet Home mine in 1957 with no luck, so I wanted to track down the fellow who dug the Alma Queen. I found he was in New Mexico, so Carol and I visited him there. He was more than willing to tell us how he found the rhodochrosite, but the mine was claimed so he would not allow me to photograph him, tape-record him or even use his name. It’s a promise I still honor.

We had a nice visit and he told us the whole story of finding the specimen and how he sold it in Las Vegas.

After a couple of days of digging, he had opened a seam that produced small rhodochrosite crystals and then he hit the Alma Queen. He was hoping the vein would open up even more and planned on continuing to dig, but a friend of his showed up and said the sheriff was coming to chase him out.

He left and later planned to sell it in Las Vegas for a big show there. His asking price was $5,000. He ran into Ed Swoboda, a well-known dealer/miner, and settled on a price. Ed bought the rhodochrosites including the Alma Queen.

Ed eventually sold the specimen to someone in Texas but David Wilber had already seen the Alma Queen, as yet unnamed, and wanted it. He tracked down the specimen in Texas and was able to buy it. Dave exhibited the specimen in Tucson where Colorado collectors saw and called it “Dave’s Rhodochrosite.” That exhibit is what caused later successful mining at the Sweet Home mine that brought to light the Alma King and the Alma Rose. I’ll share the stories of these world-beater rhombic rhodochrosites in future columns.

This story about how is rhodochrosite mined appeared in Rock & Gem magazine. Click here to subscribe. Story by Bob Jones.