Brucite (magnesium hydroxide) is an important economic mineral. In my home state of California, many a mining town has named a street after it. The mineral itself was named in 1824 for the first person to describe it, American mineralogist Archibald Bruce (1777-1818), who served as editor of the American Mineralogist journal.

Brucite frequently precipitates in fibrous foliated masses but can also grow as broad, tabular crystals that form rosettes. Its color varies. Most often it appears in somewhat drab shades of white, pale green, gray, or bluish-gray. But when it contains a significant amount of manganese (substituting for magnesium), that color may vary from yellow to brown or red.

In recent years, particularly attractive yellow specimens have hit the mineral collecting market. Whatever the outward color, brucite leaves a white streak on a streak plate and has a waxy, vitreous, or pearly luster. At 2 to 2.5 on the Mohs scale, it is very soft.

Brucite often forms in metamorphic environments, for instance in dolomitic marbles (metamorphosed limestones) and as low-temperature hydrothermal veins in chlorite schists and serpentinized dunites. It often is found alongside minerals such as calcite, aragonite, wollastonite, magnesite, and talc.

Brucite is an ore of magnesium. As such, it has been used to produce medical magnesia and as a source of magnesium metal. Its high melting point also makes it perfect as a component for lining kilns.

Despite its economic importance, brucite is not common. In North America, there are only a few localities where it appears in any sort of abundance. These include New Jersey, Pennsylvania, Texas, California, and Nevada. Worldwide, it is also found in Canada (Quebec), Italy (Mount Vesuvius and Sardinia), Scotland (the Shetland Islands and the Isle of Muck), and Zimbabwe. In addition, impressive blue crystals as large as two inches have also been found in the Ural Mountains of Russia. 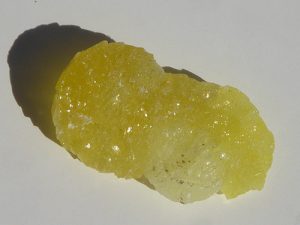 Earth Science In the News: Revised “Slip Law” for How Glacial...

Earth Science In the News: ‘Old Woman’ Meteorite At UCLA