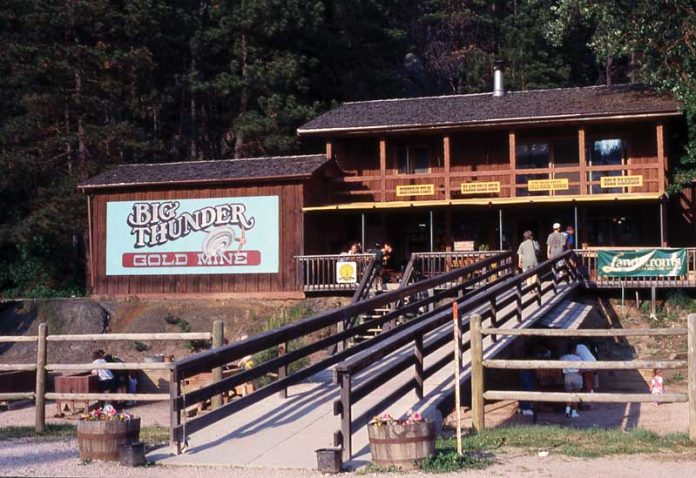 The Big Thunder Gold Mine in Keystone, South Dakota, is a great place to visit if you want to spend some serious time gold-panning and feel like an 1800’s gold miner.

According to the Big Thunder Gold Mine’s website, this is a family-friendly venue accessible for people of all ages and abilities, including wheelchairs, with no stairs to access and well-lit areas.

Where the Mine is Located

The name Black Hills is a direct translation of the Lakota name Pahá Sápa. It reflects their dark appearance from far away, as they are covered with evergreen trees.

History of the Big Thunder Gold Mine

The Lakota are one of the indigenous people of the Great Plains, also known as Teton Sioux, who arrived from Minnesota in the 18th century. After fighting the local Indian tribes, the Lakota settled in the Black Hills. In 1868, the U.S Government signed the Fort Laramie Treaty establishing the Great Sioux Reservation, exempting the Black Hills from white settlement, however, gold was discovered in 1874 and everything changed. Thousands of miners poured into the area, and the US Government took back the Black Hills and moved the Lakota people.

In the beginning, placer gold in the Black Hills was retrieved by panning the stream beds using a pan, rocker or sluice box. When most of the easily found placer gold was depleted, miners turned to hard rock underground mining, which is more difficult, demanding and expensive. Several gold mines generated the gold rush in the Black Hills. The Keystone Mine was the first big lode mine in 1891, which was combined with the Holy Terror Mine in 1898 (discovered in 1894). By 1900, the two combined mines were producing a record 5,200 ounces of gold every two weeks, according to Dale Baity in Keystone Gold Mines & Black Hills Mining History.

The Big Thunder Mine was originally known as Gold Hill Lode. It was discovered in 1882 and was worked by two German immigrants. The miners drilled the solid rock, trying to reach the adjacent Lucky Boy Mine’s rich vein. In 1907, they intersected the Lucky Boy vein after digging an adit (a horizontal tunnel) 330 feet into the mountain. Unfortunately, the vein had tapered to unprofitable status. In 1914, thirty-five years after the miners started digging, the tunnel reached 680 feet into the mountain and 240 feet underground. The mine was worked on and off until the owner, Julius Engle’s, death in 1921 and is still waiting for modern mining methods to produce again profitable gold.

The Big Thunder Gold Mine Today 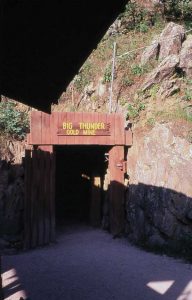 The Big Thunder Gold Mine hosts a mining museum, offers an underground mine tour and gold panning opportunities.

The Mining Museum is a replica of the Tykoon Gold Mill. The mill, built in 1895 on the Big Thunder Gold Mine property, processed ore from small area mines.

The tour of the original 1890s underground mine - the tunnel inside the hill – explains how miners dug out the gold ore, crushed it at the stamp mill and recovered the gold. The tour lasts about 45 to 50 minutes and includes both the mining museum and the underground mine. The mine tour rate is $11.95 for adults, $8.95 for children 6-12, and free for children five and under.

Gold Panning at the Mine 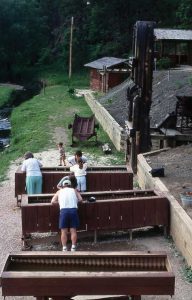 Two options for gold-panning are offered at the Big Thunder Gold Mine. One is on-site gold panning, offered in large troughs outside, with a 15 to 20-minute hands-on lesson of how to pan for gold from the mineral-rich sand and gravel using the proper technique.

Gold-panning is available all day. The fee for gold-panning is $11.95 per pan, or $9.95 when combined with the tour. The mine owners place two capfuls of bleach in the troughs to eliminate any viruses and also provide gloves.

The Big Thunder Gold Mine offers a whole day or half-day gold panning at a Black Hills gold claim stream. You will head out with one of their panning experts and pan for gold. You can keep all the finds from your claim-panning adventure. Currently, the rate for adults is $80 for the full day and $50 for a half-day (four hours). A 24-hour reservation is required for claim-panning.

This story about the Big Thunder Gold Mine previously appeared in Rock & Gem magazine. Click here to subscribe. Story by Helen Serras-Herman.

What Do You Know?