Rock tumbling is a worldwide sensation. It does not matter the age or geographic area of the participant. I see young and old together looking for rocks to tumble, one just as enamored and excited as the other. Many people live in rural areas or states where there are plenty of materials to find in nature. Yet, many more reside in cities and towns or live in states where there is little or no availability of materials to hunt, so they order online or through catalogs. There is no deterring those who have been bitten by this “rock tumbling” bug. For some, it even seems to be the glue that holds them together.

Through the group Rock Tumblers for Autism, we have identified a new group of rock tumbling fanatics, and we have embarked upon a mission to create new avenues of support and success for them.

I don’t believe I’ve met a kid who is not fascinated with rocks at some stage of their life. Growing up, I spent a lot of time on the shores of rivers and lakes with my dad and my two granddads. We were all avid anglers, or at least I became one as I aged. However, the rocks always called me away from my post at the water’s edge.

Like many others, I have always been fascinated with and wondered about how rocks formed, where they came from, and, most of all, what they might look like “inside.” Of course, they had other uses beyond causing me to dream and wonder. I think, to this day, my dad would cringe if he thought I was going to throw a rock in the water near where he was fishing. Of course, I am not above doing so just to torment him a little.

Rockhounding Runs in the Family

However, back to the topic at hand, what is one to do with all of those rocks? My children have rocks that they picked up when they were toddlers. My oldest is 35, my youngest 14, and we have a plethora of rocks streaming in and out of our lives. Even my oldest son, who is much more a “techie” than an outdoorsman, loves rocks. His grandfather, the person who created my passion for rock tumbling, gave my son a Diamond Pacific MT4 Mini Sonic when he was about ten years old. I still have it in my arsenal and recently ordered a refurb kit for the machine. My daughters, especially my 28-year-old, Elizabeth, always bring me bags of rocks they have picked up, and ask me to add them to my tumbler loads. Elizabeth even hunts one of the local Facebook rock shows on the Hollyewood Ranch page and buys slabs and rough for me to tumble or cut. It is my younger son, though, who changed how I look at rock tumbling, and created a new direction for not just me but also my family and even my friends. Thomas is my 14-year-old son, and he has Autism Spectrum Disorder (ASD).

One never knows where inspiration will come. Several years ago, my dad called me from Mississippi and said he and his wife were going to drive out to Oregon for a visit. We had all lived in Ontario, Oregon in the past, and dad had gotten deep into lapidary work. I wanted so badly at the time to work with him, but I had just opened a new business that was struggling to get off the ground, and it took every waking moment to nurse it to full health.

Finally, it did explode into a full-fledged business that led me, again, to involve myself in what was to become a budding passion. Eventually, I would sell the business. During my dad’s visit, he brought 20 years’ worth of rock tumbling and lapidary equipment and dumped it in my garage. Among all of the parts and pieces was a nearly 30-year old Thumler’s UV-18 vibratory tumbler.

Some people might scream, “Eureka! I’ve hit gold.” However, I had never seen a vibratory tumbler and had no clue what to do with it. So, while I tinkered with the CabMate lapidary polisher and a couple of other pieces of ancient equipment from my dad’s arsenal, I started searching Facebook groups for tumbling advice. I’d be remiss if I did not mention those faithful friends and fellows who do their best to share some basic geological information that provides insight for tumbling. However, it was on Facebook that I ran across a group called “Rock Tumbling Hobby Lapidary Discussion.” It became my near-daily devotional and set me on the path that I am traveling now, overseeing “Rock Tumblers for Autism.”

Inspiration Close to Home and Heart

My son wanted to start tumbling, so I got him a Lortone 33A. At the same time, a friend of mine who lives in Oregon as well, whom I have known since we were teens, and also happens to have a son with autism, wanted to start tumbling rocks. Today he is an avid tumbler. To provide a broader picture of my background, I am also a special education teacher. Through my training, I began to make a connection between rock tumbling and people who have autism. Growing up, I also had learning disabilities, and it impacted me a great deal. After school, I spent 30 years as a truck driver, as well as a computer technician, that is, until I decided to take the plunge and attend community college college. Four years later, I had a degree in teaching children who have disabilities. Then I went on to earn my master’s degree in special education with an emphasis on autism. As I was finishing my final year and preparing to graduate, something on the Rock Tumbling Hobby Lapidary group caught my attention. An 8-year-old boy who needed a rock tumbler.

It was the boy’s mother who was searching and explained to our Facebook group that she did not have a tumbler, but wanted both her and her son to connect with people who did. She explained that her son has autism and that his favorite thing in life was tumbling rocks. As a point of reference, some of the typical traits of autism are difficulties regulating sensory input, regulating behavior, and diminished social skills. The mother explained that for her son, the sound of the tumbler and the rocks’ feel was what helped him stay calm and regulated. BAM! It was like a lightning bolt between the eyes. When we gave my son his rock tumbler, we realized that the response was, greater social and emotional regulation.

Taking Action On a Passion 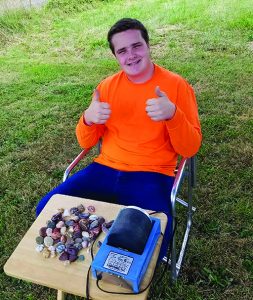 tumbler? Well, imagine that feeling of soothing calm assurance on a much grander scale. Sadly, the mother who approached the group explained that they wanted to stay connected because her son’s old tumbler had “given up the ghost,” and died. That gave me a grand idea.

I went to my wife and told her the story. At the time, I was still in college, as was my wife. We both worked, but we were at the bottom of the food chain at our jobs, so money was a bit tight. However, we wanted to help this mother and son. I sent the mother a private message and asked her if it would be okay to raise funds in order to purchase her son a new rock tumbler. She was ecstatic, and we were off. I asked the permission of the moderator to post the request to the members, and she approved. The response was unbelievable. I posted it to my personal Facebook page as well, and in a week, we were able to purchase a Lorton 33B dual drum tumbler, which we shipped to Montana as a gift to a young man with special needs. He was the first, and he was not the last.

Today we continue to raise funds to buy rock tumblers for kids who have autism. We have shipped units to Montana, Illinois, Utah, and of course, my home state of Oregon. Speaking of Oregon, another of our fundraisers allowed us to purchase a new three-pound tumbler kit for a young man in the town where I live. Alex is a middle teen who has autism and is a bit lower functioning. Can you guess what his favorite thing to do is? You guessed it. He hunts rocks.

We got word through a member of our Facebook group that this young man could benefit from a tumbler. We connected with his parents, raised funds, and met the family at their house to present the tumbler. Alex was so excited about the rocks that he took out his collection box and explained each rock he had. We had such a wonderful time with him that I told my wife I wanted to continue what we were doing.

There is one additional and important aspect of this effort, and that is Sherman Rowland at High Land Park. After hearing the story of our mission and purchasing his company’s shaping machine, Sherman and I discussed the different uses and benefits, and he informed me of his company’s forthcoming plans to offer a brand of rock tumblers for both the hobbyist and the professional. Highland Park is also known for its high-quality slab saws, sphere machines, and other lapidary equipment. I am excited at the prospect of receiving our first tumblers from them.

Sherman also helped our group regarding promotional efforts and provided advice about other elements. As a result, Rock Tumblers for Autism is now a registered 501(c)(3) charity with nonprofit status under the name CogWheels for Autism and is registered with Amazon Smile. We will be purchasing rotary and vibratory tumblers from Highland Park when they are made available to the public.

While my goal is to present rock tumblers to 100 kids in a year, under the registered charity, we are also expanding into helping purchase specific supports for children with autism that their families cannot afford. The progress is slow, but our fundraising is picking up speed. That progress is due in part to Brad and Hannah at HolleyWood Ranch, Sherman at Highland Park Lapidary, and the support of the rock tumbling and lapidary communities. Also, a local construction company has offered to build our local group a new shop to work out of so that we may expand our efforts.

Autism is the fastest-growing disability among children, and we have a driving passion for giving the children and their families the extra support they need, in many different ways.

Who would have thought a child with a rock would become such an inspiration? There is no experience equal to seeing the excitement on children’s faces when they talk about collecting rocks. Many of my students have brought rocks to me from their beach and river excursions. There is also a depth of joy and relaxation in preparing and tumbling rocks that I have never experienced in any other hobby. I hope to inspire the world to delve into a kind of art that requires no physical talent, but only imagination, a little bit of patience, and the rock tumbler of their choice.

To see what recipients of the gift of rock tumblers are up to, visit the Rock Tumblers for Autism group on Facebook: https://bit.ly/2WFMB4f.