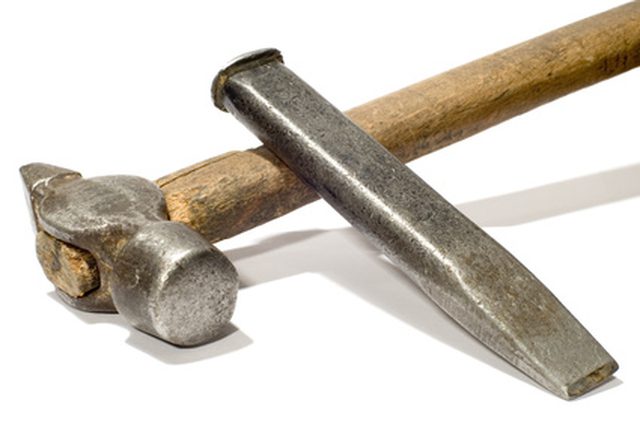 Yes, this is a great time of year for rockhounds to do some serious mushroom collecting. The mushrooms being referred to here are not those collected by mycologists, but those more specific to the rock-collecting hobby. We are talking here about the mushrooms that form on the heads and ends of our rock-splitting and gap-widening chisels.

Diagram 1 illustrates the mushrooms that can grow on our chisels if we are not careful. Mushrooms growing on our chisels are indicative of several things:

Why do mushrooms form? A bit of background information is needed to explain.

Good rock hammers are expensive. Rock-splitting chisels are much less expensive. If we want a thing to break, we would want the cheap chisel to break rather than the expensive hammer. Well, engineers would rather not have anything break, so what they did was to create a better rock chisel that was made with two different hardnesses of metal. The sharp end of a chisel is rather harder than the end being struck by the hammer (Diagram 2).

As we prepare for upcoming collecting trips, we collect all the mushroom-headed chisels. We grind down the damaged ends, re-form them, and re-create new, safe striking surfaces. So just how does one do that?

Many home workshops have a metal-grinding machine. We use the grinding wheels to reshape the chisel’s end by grinding away the damaged parts to form a new surface (Diagram 3). Water is used to cool the metal as it is being ground. Water keeps the metal cool so as not to change its metallurgical hardness or have it lose its “temper”.

If your workshop does not have a grinding machine, there are, without doubt, members who have such machines and might be willing to help. If not, there are sharpening services available that specialize in reforming mushroom-ended chisels.

While one is at it, check out the chisels’ business ends, the ends that do the actual splitting. Now might be a great time to do a little judicious reshaping there, as well (Diagram 4).

Sharp chisels and non-mushroomed chisels are safer chisels—“safer” because the tool can still be used unsafely.

What to Do with Juniors?